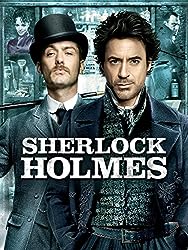 There's mayhem in London in the late 1800s! When the dreaded Lord Blackstock is executed but seemingly rises from the dead, it's up to Sherlock Holmes and his trusty partner, Dr. Watson, to solve the mystery before more problems arise. And with the added distraction of Irene Adler from Holmes’ past, he’s bound to be headed into more trouble than he anticipated. Here are a few movie mistakes to watch for when you’re watching “Sherlock Holmes”.

∙ On the back of the envelope that Irene gives Holmes, it notes the Grand Hotel, PIcadilly, London. The Grand Hotel is actually in Trafalgar Square. Still within walking distance however, for those interested in making the trip!

∙ When Holmes goes to break into the lab, he knocks on the door with a riding crop. He puts it under his left arm just before we see a quick close-up view of his bag opening. When he bends down, he puts the crop under his arm again.

∙ After finding the secret room at Lord Blackstock’s father’s home, Holmes picks up a tooth with his left hand. We see a quick glimpse of the right side of his coat open. But in the next front view of Holmes, it’s his right hand that puts it into the left side of his coat.

∙ When Holmes is battling Blackstock near the end, Holmes swings on a cargo net that’s tied to the scaffolding to gain an advantage. But in the very next wide angle of the two men and the bridge, the next is not there.

“Sherlock Holmes” (2009) stars Robert Downey Jr., Jude Law, Rachel McAdams and Mark Strong. It runs 128 minutes and is rated PG-13 for intense sequences of violence and action, some startling images and a scene of suggestive material.


Get your copy of "Sherlock Holmes" here: