The music industry gathers in Cannes each January for three days of networking and concerts called Midem. As is the case during the film festival, you can spot everyone who is anyone by the badge that dangles from their neck as they make their way about town.

Midem University runs during the day inside the Palais des Festivals where speakers give marketing insight, up and coming technology is introduced and international vendors court perspective clients. Keeping with the school theme, a “year book” is even issued with all participants' contact information.

At night the Midem Festival kicks off with three evenings of triple billed concerts where bands play a set each to promote the release of a new album. Access to the Magic Mirrors venue, one part circus tent, one part saloon, is by invitation only. For the general public, the Midem Off where up and comers perform abbreviated sets, is held in Cannes’ pubs. 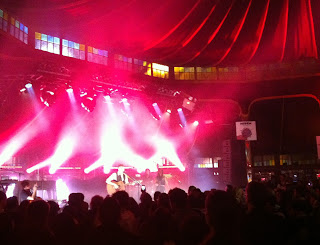 Highlights from this year’s showcase were Asaf Avidan who seems to channel Janice Joplin’s voice through his small male frame. He was followed by the English outfit Madness who entered the stage with the showmanship of WWF wrestlers preparing for a bout. Towels draped around their necks, bowler caps, and one band member even melodramatically sipped a dainty cup of tea as they launched into ska. I’ve never seen a mosh pit as smiley as the one that consumed the front half of the floor space. As the night drew to a close even the jaded industry types couldn’t resist turning their 80’s hit “Our House” into a sing along. 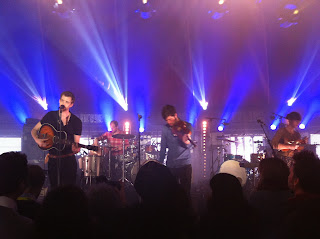 Monday’s closing night performance by the Belgian group Balthazar was my favorite of the festival. Their brand of indie rock a danceable dose of melancholy. I’ve been streaming their newest album Rats on loop and it just keeps getting better. French model Lou Doillon’s venture into music making was much anticipated and drew quite a crowd. On stage dressed androgynously, she wore a fragile smile and performed stiffly but the genetic given grace of having Jane Birkin as a mother makes you a mythical creature despite how you move. Her brand of pop-folk was delivered with a country twang as pronounced as Jolie Holland’s, not bad for a Franco-English gal.