Virtua Fighter 5 lets the graphics prowess of the PlayStation 3 shine. The question is whether great graphics alone can make a fighting game worth playing. 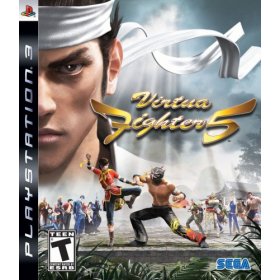 First, the good. The graphics in Virtua Fighter 5 are spellbindingly beautiful in many situations. The landscapes are lush. The movements of the fabrics are fluid and natural. The physics engine is quite impressive. Yes, sometimes the textures can be shiny, and the water more mercury-like that truly watery. Still, this is beautiful to watch.

The characters are each very unique. The look and feel of each character seems true to their background. Not only that, but each character's movements and actions is distinct to them. It's not that you have a "kung fu" style that is replicated 30 times across 30 different blue-green-yellow characters. They put a lot of work into ensuring that the characters are extremely differentiated.

That being said, the main gameplay is very restrictive. The square you can fight in is extremely small. There is limited interactivity - the snow moves away from where you step, the wooden walls might dent a little - but it is very small changes compared with what other modern games offer. The spectators in the background look like animatronic robots on a short movement loop.

There is a standard mode where you go through a series of rounds to win, and then an 'arcadey' mode where you are pretending to go to different arcades to challenge other players. In the arcadey mode, you can unlock new items and outfits for your characters. I would have appreciated a much greater depth of options here. It would be nice to have a story mode, where you can learn more about a given character and their background. Maybe a career mode where you learn new skills along the way and build up your reputation.

I think part of the problem was that the gameplay itself was great to watch, but rather easy to play. I realize this is great for new kids and new fighting gamers - but there should be more complexity to how the enemies react to you and start to pick up on your patterns. I could use the exact same three keystroke pattern to defeat all of the first 6 enemies I faced, without them ever learning to guard against me.

Which leads into the next problem. Usually in fighting games, you do all your training against the enemy AI to learn the keystroke combinations, so that you can face your real challenge - human opponents. Enemy AI is rarely as much fun to fight as a real, live human who has honed his or her skills to a razor's edge. But you don't have that option here! No online gameplay at all. So you can build up your character, learn the skills, perfect the techniques, and then ... what? Earn a new pair of sandals?

I really appreciate what they've achieved with the graphics and movements here. I give them kudos for that programming. Now it's time for them to take that work to the next level, and to bring it online, and to add in more complex gameplay and arenas.