I am a big fan of feudal Japan and was thrilled when Samurai Warriors finally came out. This is a version of the classic Dynasty Warriors set in Japan. 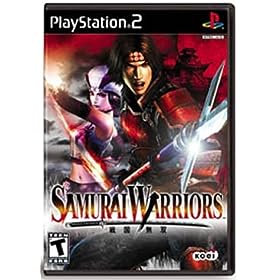 If you've played Dynasty Warriors before, then you know the basic layout. There are many characters to choose from, and each moves through his or her own timeline in feudal Japan (the 16th century) when there was great conflict and strife in Japanese history. You're dealing with Oda Nobunaga and other classic historical figures as they fight for control of Japan.

The graphics are really great, with nice sword moves, costumes, backgrounds, horses, and more. You really get the sense that you're battling your way through a feudal Castle or fighting across plains to achieve your objective.

You can build a character up from scratch, going through training and joining a clan. Or you can take a pre-designed character and start through historical missions, building your clan's honor and prestige.

There are the traditional Musou moves where you wipe out entire groups of forces with one series of blows. There are combo attacks, and loyal followers to assist you in your goals. There are the cut-scenes that make the history clear, and the 'over the shoulder' sad looks as your enemies retreat from the map.

While some might say this is just another release of Dynasty Warriors, I really love the Japanese world so much that I gladly bought this immediately on release and we have been playing it ever since. There are enough upgrades - from horse attacks to character development - to make it WELL worth playing. And for me, setting it in a Japanese history instead of a Chinese one is a huge bonus.

I highly recommend this for any fan of strategy. With all the unlockables and replaying you can do, plus the multi-player options, you can easily play this game for months!