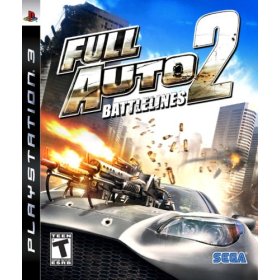 First, the setup. It is a rough and dirty future where a street gang sporting fast cars has taken over the streets, making the average citizen afraid to venture outdoors. A sentient computer system is trying to save the city, and wants you to infiltrate this gang to take it down. So you are street racing with machine guns and bombs in order to save the world :)

The game tosses you right into the fun with a triple mission of infiltration. You get races and kill-the-other deathmatches. Where it might be rough in other games to get thrown into the action, it's actually really fun here. You blast away with your machine guns, zoom around corners, and discover the secret paths to make your laps go more quickly. The basic objectives are relatively simple to hit, but you get encouraged to try again for the secondary objectives to get skins. I like that they tell you up front what you'll win if you hit your marks.

The graphics are very well done. The cities are gritty, with run down alleys and broken down storefronts. It's a lot of fun to blast away at the other cars, watching pieces fly and the environment destruct. You can cause many things to happen by destroying your world - buildings fall doesn on rival cars, new pathways open.

There isn't much to say here about sound. There's the sound of squealing tires, explosions and blasting weapons. Your computer friend has the calm, even voice that prods you onward in your quest. The music soundtrack is sort of a low key urban rhythm that is very unobtrusive and doesn't distract you when you are trying to juggle the 7 cars bearing down on you.

This isn't a simple Mario Kart style of game. You really are tested in your skills. There are multiple paths, multiple enemies, multiple styles of cars, weapons, defenses and skills. As you go through the game you unlock a large number of options, and it comes down to your particular style of gameplay as to which works best for you. Some people are snipers, some are in-your-face blasters. The cars I customize will vary greatly from those my friends create, and each one works wonderfully for the way we play.

This is also what makes the game shine in multiplay. You have to think creatively about how to defend yourself against a given car with its weapons configuration, and how to best attack them. Multiply this by multiple opponents and you can see how this becomes a game requiring both fast fingers and an agile brain.

Even the cut scenes and config screens have much better graphics than previous games. They put work into each and every aspect here.

There are only minor complaints - if you change your controller config, it still prods you to do the "standard" button presses in the game. Also, I still find the zoom in after a kill to be annoying and unnecessary.