Beatmania bills itself as a DJ music mixing game. Really it's a lot like Guitar Hero, but instead of a guitar you have a short keyboard that makes either keyboard or drum noises. 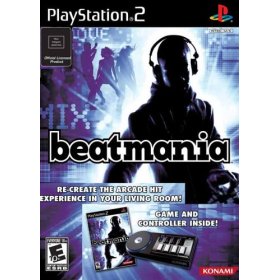 I in fact play keyboards, so I was very interested in seeing how this plays. There are only 4 white keys and 3 black keys, plus a "turntable" to spin. The keys were easy to play and in only a few minutes I was hitting 200-in-a-row on songs I'd never heard before. This was a quick glimpse into the long term benefits and problems that I found as I continued to play this game.

On the good side this IS like a piano. This means that, unlike with Guitar Hero, you actually gain "real life skills" by playing this game! Your ability to quickly hit the various keys is really good training for actual piano playing. Sure, you're not playing real notes on a staff. Still, being able to hit 2 keys at once, or to move quickly between keys, is quite important.

The game really is enjoyable when you get into a groove, playing along with the song and hitting all the notes. Depending on the song, you are playing piano, keyboards, drums, cymbals and other instruments. It's a lot of fun.

On the bad side, I really wonder who chose the song list for this game! I think I recognized 3 of the songs. There was little real variety. I own a ton of karaoke, drumming and other "music" style games. I really love this genre. The song list in this game is probably the worst I have ever seen in any of them. It's not just that I didn't know the songs - it's that many of them were really bad songs. I went through them to get to the top rating - but they weren't songs I enjoyed playing along with in some cases.

The turntable controller is really iffy. While the keys were very responsive and had a good "finger feel", the turntable was VERY sticky and often would not turn well. It's frustrating to be playing along perfectly, then to break your chain because the turntable is stuck (again).

Which brings up another issue I had - gameplay flow. There are a LOT of aspects of gameplay which were just really poor in this console version. I realize the game is adapted from arcade games. Still, it doesn't mean we have to suffer with the BAD aspects of arcade gameplay as a result! For example, you play through 3 songs - and then you are DONE. No more songs. With other games, I get rewarded! I can keep playing! Here, it barely even says "good job" before it goes into an 8-minute-long credit run. OK, you can skip them, but the point is that the game should keep going if you are doing well. It shouldn't end after only 3 songs and make you restart from the very beginning.

The game is very harsh about scoring. If you get a chain, you're usually OK. If you miss just one note, perhaps because of a sticky turntable, then your points plummet.

In one of the most inane design elements ever, when you get your praise about doing "perfect" on a note - those words show up OVER THE INCOMING NOTES. Who thought that up?? Show them off to the side somewhere - not covering up the notes you are trying to play.

There are little videos to the top right while you are playing the songs, but since you're paying attention to the incoming note markers, you never get to see them. You could only watch them if you had a friend who was good enough to make it through the song for you. I would much rather see little happy audience members, a la the karaoke games, that cheered you on. That would be much more enjoyable than a video that I can't watch.

The sound is rather good, which you would hope from a game that focusses on music. That is - you hear the instruments quite clearly. As commented before, the actual song mix is another story.

I'm torn on this game. It is a great concept but there are some real flaws here with how it was implemented. I really want to get the NEXT version of this game when they fix all of these issues. However, if enough of us don't buy this current version, they won't make a next version :) So I would say to go ahead and buy this if you enjoy music / keyboard games, if only because it really does build up your keyboarding skills. Then we can all write the makers and ensure that they do a better job on their next version. At that point we'll have the player unit and will only have to buy the new software.