We got our hands on an XBox 360, a PS3, and a Wii on launch day. Each is good at specific tasks. Here is a fully unbiased review of how the PS3 performs as a next generation console unit. 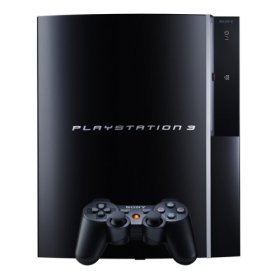 To start with, the PS3, like the XBox 360, supports full high definition. The Wii only supports a lower resolution. Since the Wii has a much lower price tag, that is a fair trade-off for people with a tighter budget. Gamers for whom a very high level of graphic detail is important will have to pony up for that ability.

Along the same lines, the XBox 360 supports the HD format of high definition DVDs for movies, while the PS3 supports the Blu-ray format. If you haven't been following the whole format war for high definition DVDs, I have several articles on the topic on my gaming site. In short it's like the VHS/Beta wars when the VCR first came out. Is one better than the other? Will one format win out as the sole survivor? There's no way to tell. People will argue vehemently that one is better than the other. From a gaming point of view, the PS3 has the Blu-ray BUILT IN meaning every game can have 50 GIGS worth of game information. Think MASSIVELY huge maps, types of characters, etc. The XBox 360 only uses "regular" DVDs as its base game holder, which is around 5 GIG. That is much smaller. You can buy an add-on HD DVD unit for about $100 but the storage is still smaller than Blu-ray - about 30 gig.

People will argue about graphics until they're blue :) A lot of this comes down to how a specific game company *uses* the ability of the system. Looking at graphics on a tetris-like game will be much different than viewing the graphics of Oblivion or Gears of War. I found 360 graphics amazing on Oblivion. I equally found the PS3 graphics quite impressive on Genji's cut scenes (no enemy crabs in sight). Since both are high definition, I think that both have the same potential in real life terms. Both really shine in terms of fluid motion, precise detail and realism. I've seen it on both systems, on certain games. I've also seen junky graphics on both systems. Both are much better than the Wii.

How about sound? All of these can plug into your stereo system. My boyfriend and I are both musicians. We have decibel meters and other sound-sensing tools. All three systems can create amazingly complex sounds, music, and in general a "gaming environment". Again I think it comes down to specific game makers, how they choose to use or not use that ability. It also comes down to how much you the gamer spent on your stereo system :)

Speaking of sound, I do have to comment that our 360 is quite loud when it runs, despite our many attempts to help it be quieter. The PS3 right out of the box is MUCH quieter. Score 1 point for the PS3.

On the general operating system for the units, all three consoles are going for more of a "general use entertainment system" presentation. The XBox has customizeable tabs that let you download new games, manage your environment and so on. The Wii also has channels that let you organize your gaming world. The PS3 has an interface almost exactly like that of the PSP, complete with cool drifting smoke waves in the background. You choose which area you want to work on - game, music, internet connection etc., and drop down to alter whatever feature you're interested in.

So on to the on-line aspect, which most gamers are now fully interested in. Where the XBox 360 makes you buy an external connector for wireless, the PS3 has that built-in on the 60 gig model. The 20 gig model still requires an external connector (these run about $100). All will let you plug in a cable if you're still running a wired household.

As a side comment on that, the XBox 360 has a 20 gig hard drive. However, they take up about 12 gig of that with their base system. So really you get 8 gig "free" for other things. Now, 8 gig might sound like a lot. But I still remember when the PS2 first came out and everyone was raving about the 8mb memory cards, how you could never possibly fill one of those up. We now have 8 memory cards and all are pretty much full. I have no doubt that 8 gig or even 20 gig is going to fill quickly. With the PS3 you at least do have that option for the 60 gig and it is really worth it. With the 360 your only option is to get an add-on drive to in essence back up the content you're not currently using and free up the main drive.

How does the online world work on the PS3? The XBox definitely has the advantage here. Until this generation, *only* the XBox had a thriving community in their live world. The XBox 360 connected right into that XBox Live world, and they boast a *huge* community of gamers who actively gain points, play online and form virtual worlds. The PS3 and Wii both have to play catch-up at this point. Even if they have better interfaces, it's a matter of converting over all those players who have clans, familiarity and high point collections on the XBox world. Imagine if a new MMORPG came out right now that had fantastic graphics. Sure it might be wonderful - but will you really get all 800 trillion WOW players to drop their world and characters and friends to convert, especially if it costs more? It'll be a hard, slow sell.

My summary? I definitely think all three have great games and that all three are worth owning. Of course I'm in a position that I *can* afford all three, which many people are not in. For example, I *love* the Zelda series, and I *love* the Final Fantasy series. I would be hard put to tell a person "you need to get Zelda instead of Final Fantasy". I would want the person to have both, because both are great for different reasons. If you really truly can only save up for one of the three consoles this holiday season, it isn't going to come down to which console is "best" for all players in some sort of a global way. It is going to come down to which console is best for YOU based on your specific gaming style.

If you're on a really tight budget and just want something better than the previous generation, go for a Wii. It's cheap, the graphics are better, and the remotes are great fun. It has Zelda :) If you have a larger budget and really want the high definition, you're now choosing between the 360 and the PS3. You really do have to look at the specifics of each, and think seriously about your gaming style, to see which matches you best. If I were to make a flip summarization, if you really love online gameplay, I'd go with the XBox 360. Its years of head-start really give it a robust environment here. If you are looking for more of a home-based media center for your MPs3, photos and huge world gameplay, I'd go with the PS3. It definitely has the advantage on large scale games.

Feel free to email me if you have more specific questions, or for screenshots, graphic descriptions, or interface information on any of the three systems.

Buy the Sony PlayStation 3 from Amazon.com