Untold Legends Dark Kingdom is a traditional role playing game for the PS3 console. You can be a warrior, scout or mage, adventuring and slaying enemies. You customize the color of your clothes, and you're off. 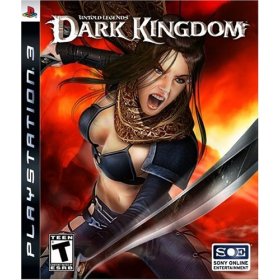 Gameplay involves wading into a lot of enemy groups and button mashing. You can get chains of short or wide attacks going, and the animations are pretty smooth of the dancing swords. As you gain points, you level up, choosing to build your strength, health, magic power, or whatever else you wish to focus on. You also gather items to get better weapons, armor or magical boosts. You save at set shrines along the path.

The graphics are rather impressive. The game goes for a cartooney yet realistic look. The game is rather obviously made with polygons, and sometimes the characters can look a bit "angular". The grasses wave as little "grass units" and the rocks look a little blocky. Still the overall impression is quite a nice one.

It's really interesting how they designed some aspects of the landscape. For example, take a pool of water. It could be mirror smooth when you first see it. Have a fight in it, and soon it is sloshing as if a giant thunderstorm were hitting an ocean. Stand by it for a few minutes, though, and the water ripples begin to calm down slowly, bringing it back to a state of calm.

The cut scenes are a mixed bag. Most of the cut scenes "use" regular characters for movement. That is, they aren't "better" animated cut scenes - they use the exact same graphics as the regular gameplay does. A few other cut scenes are done in a more brown-impressionist style.

The sound? Well, really it's just slash-slash-slash-hiyaaah! The voice actors aren't great, but they aren't awful either. Sometimes the dialogue is rather silly, but that's not the actors faults. The Carmina Burana style background music can get a bit ponderous. I normally like that type of music, too!

There's online gameplay where groups of up to 4 players can take on a given level, playing at a common difficulty level and slaying enemies together. This can be a fun way to explore the maps at a much more difficult level than you could normally take on by yourself.

This isn't a huge, uber-complex RPG like Oblivion. It's more of a casual hack and slash a la Diablo. There isn't complex storytelling here. Your commander barely needs a few rumors to spur him into rebelling against his King. Lots of enemies seem to live in trees, to drop on your head.

All in all, this is a fun, casual RPG that you can pick up for a few hours, play through an area, then put down again to do something else. It doesn't boast cutting edge graphics, but it's plenty fun to hack and slash your way through a few demons and make some progress.