Tea and Cake in the Marais

We ruled out lunching at the falafel shops on rue des Rosiers, where bearded men in black hats leave temple to dine kosher, and decided to snag a table at the artsy tea and tart shop down the street. It is a stone’s throw from the Hotel de Ville where the fashionable gays of Paris stand behind velvet roped rectangles of sidewalk to drink pints.

Inside Le Loir dans la Theiere, layers of theater posters paper the wall space not taken by Alice in Wonderland-esque murals of tea parties. The shelves displaying dusty antiques and roomful of mix matched armchairs could be the contents of a street-side brocante where overpriced antiques and discards are pedaled. All eyes, though, are on the marble sideboard displaying the days choice of dessert with names chalked on the slate behind. 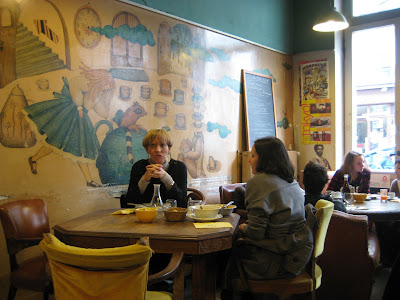 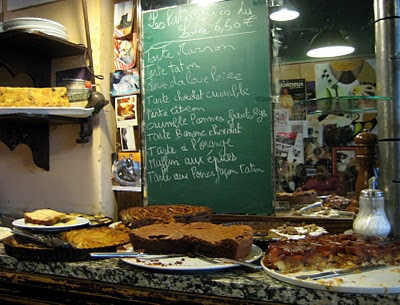 The din of plates and conversation add to the cozy atmosphere. Establishments of such character are a rarity in Paris where the brasserie prevails on every corner. There men gather to watch the endless football coverage, waves of customers line up to buy thimblefuls of coffee or cigarettes (yes, smoking is still fashionable in France), and the meat and potatoes menu is far from original.

At Le Loir dans la Theiere the carte du jour hanging from the wall proposes several tarts: blue cheese and pumpkin, camembert and spinach, or Swiss, pine nuts and honey. The lasagna or cous cous might even tempt you to consider the savory fare before you saunter over to the buffet to choose between cake, crumble and pie.

We snagged the waiter long enough to have the smorgasbord presented to us. Before skating off to attend the other hungry birds he read their names and gestured open-handedly to each cake in the way guests would be announced at a ball. I was most interested in the lonely slice of millefeuille, layer upon layer of pastry and cream drenched in caramel, but watched as the last piece was carted away.

She and I decided on two pieces. Tea was served in a heavy silver teapot, the slice of lemon tart topped by a dangerously tall cloud of meringue, and the chocolate pie wore a cookie crumble on top. When the waiter arrived with the crumbs of the millefeuille platter I professed my love for him. The pear-shaped woman at the table perpendicular to ours narrowed her eyes judging our hedonistic indulgence in working on the three plates simultaneously.

We left the crusts like bones on the plate, not out of self control like the skinny Parisian girls who dress exclusively in black and believe like Kate Moss that, ”Nothing taste as good as skinny feels.” Pant buttons were popped with capacity reached.

A meal, cake and tea cost roughly 25 euro. Stopping in for the 5 o’clock gouter and foregoing the salty, the set price is 10 euro. Don’t arrive too late, the café closes before dinner hours commence, once the desserts are polished off for the day.

You can walk off your meal browsing the funky shops down the street. My favorites are Hazar for hand crafted jewelry and reworked fabrics and FreeP for funky vintage dresses. The Marais is a Paris neighborhood well worth getting to know. 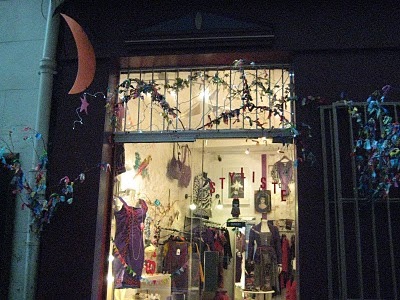 
You Should Also Read:
more about vintage shopping in the Marais