If you're a fan of horror movies, Dead Rising is probably right up your alley. You play a photojournalists trapped for 3 days in a suburban mall full of zombies. 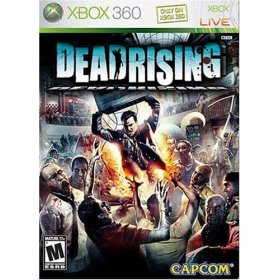 This game is a mixed blessing. Let's start with all the good aspects. The game is FUN. We've all seen the movies with zombies staggering around, and we've all hung out in malls, feeling bored. Put the two together, and voila! You can walk into any store and grab things to bash the zombies with. Run them over with a lawnmower! Pick up a piece of wood and start swinging! Or, my personal favorite, grab an electric guitar at the music store, whip it around like a fast-moving samurai sword, and hear the TWANG when you make contact!

The food system actually makes sense here. You go into food court shops! If you find the food in its base form, it's mildly healthy. If you take the time to cook it, it's even better for you.

There's an interesting plot to go with it too. I love that the various humans have names and that you actually learn about them, see their interactions and connect with them. You really care (or at least I do!) when you screw up and they get killed. It gives you a lot of incentive to replay the game to try to get everybody out. If you save a husband and his wife, they have a joyful reunion! It really draws you into the game.

So there is definitely a lot going for this game. However, there are a few signs that the game could have used a few more months in testing before it was released. First, we have a large high def TV, so we don't have a problem "seeing things". However, I've heard from many of my site visitors that on smaller TVs it's nearly impossible to read words or to understand the text messages. That's just unfair. They should have made the game easily playable even on non-high-def or smaller TVs.

Plus, why have to read dialogue at all in a horror game? That really interferes with the immersive quality. If you're knee deep in zombie fighting, you don't want to have to puzzle out what a victim is saying to you. They should just yell it out to you in real time so you can keep swinging while you listen.

The real killer here, though, is the loading screen. You take 5 steps. LOADING. You turn around. LOADING. You go up the stairs. LOADING. Good God!! With all the other HUGE map games out on the market that load seamlessly, there is no reason that a mall-based game could not do the same. It might have taken a month of coding time to work that in but it would have been WELL worth it.

Also, the save system is questionable. Only one save? One save at all? What if a friend comes over and wants to play forward for the weekend, but you want to be able to have your save spot for your own play after he leaves? You can't? Having just one save spot, in a world with a massive hard drive of storage, is nonsensical.

Still, you can deal with those issues, and the game really is a lot of fun. Remember though that it is a MATURE game with zombies with exploding heads and a lot of gore. So if you're a mature gamer who enjoys horror, definitely pick this one up!