I still remember when the Sony PlayStation 2 first came out, with its 8mb memory cards. The game store owner was raving about them. "You'll never use one up!" he said. Now we have eight ... it really goes to show how every time new technology opens up, developers immediately find a way to fill it up. 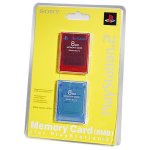 First off, many games now take up massive amounts of save space. If you're playing a game like Final Fantasy, where you want to save every 1/2 hr to hour just in case you get yourself stuck and need to go back to build up your characters, you use up memory card space quickly. Believe me, I'd much rather spend a few extra dollars on memory card space, vs wasting weeks of frustrating time having to replay entire games to get past a difficult boss.

It's also critical, if you have more than one gamer in the family, to have separate memory cards. I can't tell you how many people email me at my gaming sites, wondering if they can "recover" lost save data because someone else accidentially overwrote or erased their save game. If it's a game you just started playing it's not so bad - but if you had been building your characters up over months, and had just about solved the entire epic game, it can be heart wrenching.

These memory cards work for all PS2 games. If you get yourself a PS3, then you definitely will want to also get the PS2 - PS3 memory adapter. This little unit lets you plug your PS2 card into it, then a USB connector plugs into the PS3 so that the save games all read right into your PS3. Now you can play all your PS2 games on your PS3 without having to start from scratch. Note that your PS3 does NOT natively let you "stick the PS2 memory card into it". There is no slot on the PS3 for the PS2 card.

Also, for games that you play for multiple weeks, I definitely recommend having a memory card backup of your current save games. Memory cards get lost, they get "borrowed" by accident, they do lose data occasionally if you step on them or drop them in the snow. Just like you back up your computer's hard drive occasionally, back up those important game save files. It only takes a few minutes and can save you months of replaying.