Final Fantasy is sometimes thought of as a kiddy game with chocobos and moogles. Final Fantasy XII proves that this series can present an awesome storyline and graphics that all ages will adore. 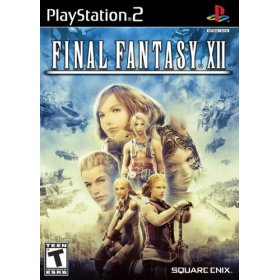 Don't worry if you haven't played all of the other Final Fantasy games. You don't need to. There are subtle carry-overs, but this game is meant to stand alone. You are a young orphan in a city recovering after a war. The cruel Empire has taken over your home town, and you enjoy causing trouble for the soldiers.

Soon, of course, you're swept up in an epic rebellion. The storyline here is just *amazing*. Not just the plot itself, but the voice acting, the dialogue, the graphics, they are top notch. This is really like being a part of an extremely well done drama movie. They delve into issues of honor, loyalty, love, betrayal, and more. I'm an adult gamer, and I was staying up many long nights because I wanted to see where the story was going. Some of the subtle interactions between characters in cut scenes are just amazing. The small nods, the looks in their eyes, you are hard pressed to remember that they are animated in a computer game.

Gameplay itself revolves around a party of characters going on quests, fighting in battles and moving through the large world. Each character gains experience and skills as they go. You buy them new weapons and armor, train them in spells, and aim them in their career growth however you wish. There is a dual system in play here. First, you need to physically own the weapon or item you wish to use - say an iron sword. But then you need to KNOW how to use it too! You can't just hand an iron sword to a 10 year old piano player and expect her to know how to use it. That skill is called a "license". You have an online license chart that lets you manage what each character knows. Licenses relate to each other. If your character learns the basics of sword work, now they can learn a more advanced version. It is very intuitive and adds a fun element to the game. It's not just one straight line that you choose and are stuck with. It's an all-directions layout where you can try new skills or expand out as you learn the system better.

I really like combat in this Final Fantasy as well. Instead of random battles where enemies appear out of nowhere to assault you, all enemies are "on the map" with you. If you're running along a path in the desert and see something really scary in the distance, you run away from it! You don't have to worry about enemies springing up out of nowhere to slam you into the ground.

The enemies in general are challenging but not impossible. There are spots where you really have to think about the enemy and what its weakness is to defeat it. You can't just brute force bash away at everything and hope to succeed.

Still, as great as the gameplay is, and as gorgeous as the visuals and music and voice acting are, I really have to come back to the plot and characters as standing out here. There's been a lot of talk in the gaming world about a game that finally goes from "little pixels on the screen" that you move from X to Y to the point of *caring* about these characters, about what they are going through, and feeling emotional about their highs and lows. I really think Final Fantasy XII has hit that level. Yes, there are one or two twerpy characters that can be annoying. Even Star Wars had Luke whining about the Takashi Station at the beginning, to set his "basis for growth". In general, though, every single character here seems real, seems complex, and you don't want to put the game down.