The PlayStation 3 controller has gotten a lot of press because of its lack of vibration. However, it is wireless, extremely light, and has tilt sensors in it. This seems a great trade-off during gameplay. 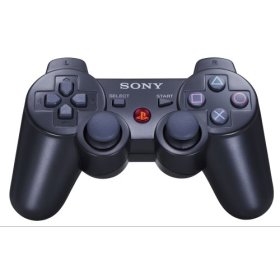 First, let's get through the "bad" that many people have gotten upset about. They took out the rumble controller from the PS3 controller. This was for legal reasons - a company which developed that rumble technology took issue with Sony using it. Some people feel it really affects gameplay not to have that rumbling.

I have to admit that I am VERY happy, personally, that the rumbling is gone. I always turned off the rumble in games where I could. I am on my computer pretty much 24 hours a day, and if I play a game with rumble on, it *kills* my wrists. If you're a rumble fan, this is a decision you'll have to make for yourself.

Now, to the good parts of the controller. First, they all come wireless for the PS3. I *love* love wireless. Wires cause huge clutter in our living room, with all our systems and equipment. You only have to plug the controller in to power it up. It's a regular USB power-up so you can use your iPod's plug (assuming you have an iPod) or plug it into your computer or XBox 360 or anything else with a USB on it. That is to say, you don't have to power it up from your PS3 if you don't want to for some reason.

Next, it is super light! I imagine this is because it doesn't have to hold the motors that cause rumbling. I really appreciate the lightness. You might not notice if you only play a game for an hour or two, but if you're doing marathon sessions of multiple hours, the weight of the controller really does begin to matter.

Just like the Wii controllers, this controller has a tilt sensor in it. It actually knows when you tilt and turn the controller, or shake it. Depending on the game, you can use those tilts to look around or to shake off an enemy. That really gives you much more interactivity with the game, much more than button pushing.

The center PS button lets you turn the unit on and off, which is great if your console is off in a shelf or corner of the room.

In general, I think they did a great job with the PS3 basic controllers. The main console sale both for 20 and 60 comes only with one controller - so be sure to get yourself a second one!