Now THIS is the type of game I was expecting to get on the XBox 360's graphics! It is simply gorgeous. Hundreds of distinct characters, each acting individually and with his or her own look. 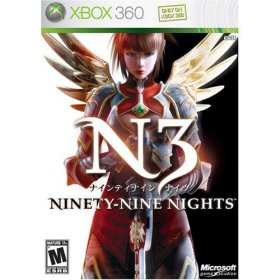 You start by playing a cocky female fighter. I liked this a lot - the character, while a bit revealing in the chest area, actually wears armor and her moves are *great*. The sword trails and combos are visual artistry.

This is of course very similar to both the Dynasty Warriors series and the Kingdom Under Fire series. That's not bad at all, it's a genre of gameplay that I enjoy. If you haven't seen these games, think of the opening scene of Lord of the Rings. When Sauron is swinging his weapon, blowing away tons of elf and human soldiers on each sweep, that's what you get to recreate here.

I did find it annoying that you have to play all the way through as a character to get to start another - I'd much rather be able to choose from a roster of characters right from the beginning. Also, I found many of the names of the characters to be quite silly. It unnecessarily drew away from the game's world.

To make it worse, there's no mid-level saves. So you could have racked up incredible points, and be at minute 29.5 of a 30 minute level, and one slight distraction like "Lisa, pick up that ringing phone!" and POOF you have to start all over again.

Still, I can deal with that. The game is fun enough that I don't mind replaying a level. Getting to more characters is certainly the incentive of playing through the levels as a set. The character models are gorgeous. The animation of the actions is gorgeous.

Sure, if you're not into this style of gameplay, then there are other games you can buy. But if you're a fan of the sweeping attacks and gorgeous graphics displayed here, you'll be up for a great experience!