Rhinestones – Junk jewelry?? I think not!!

Rhinestone, paste or diamantes all mean the same thing – lovely, colorful gemstone alternatives. Made from rock, crystal, glass or acrylic these wonderful substitute jewels bring the availability of high-end couture jewelry to the masses. Originally, rhinestones were rock crystals gathered from the river Rhine. The availability was greatly increased when around 1775 the Alsatian jeweler Georg Friedrich Strass had the idea to imitate diamonds by coating the lower side of glass with metal powder. Hence, rhinestones are called Strass in many European languages. In 1955 Swarovski brought rhinestones to the next level with the advent of the AB coating. AB or Aurora Borealis is a thin, vacuum-sputtered metallic coating applied to crystal stones to produce an iridescent effect. Named after the natural wonder of the Northern Lights, Aurora Borealis was and still is a huge success. 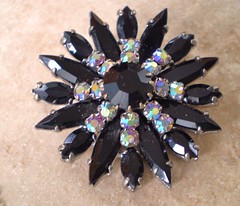 Historically, rhinestones are manmade gems from highly refined glass. By using various metals the glass was colored to the desired shade. It was then pressed into molds. Each stone was then ground and polished by machine, resulting in a brilliant glass stone. Often the stones were foiled on the back which increased their brilliance. Even today, the same refining process is still used. You will often here rhinestones referred to as paste. Paste is glass stone that made of ground glass which was molded and then melted, producing an opaque dense glass frosted stone which has many air bubbles and swirl marks. The high lead content glass was then polished and faceted, and set on either copper or silver resulting in a brilliant stone. Today, crystal rhinestones are produced mainly in Austria by Swarovski and in Czech Republic by Preciosa and few other Bohemian Glassworks in Northern Bohemia. In USA, these are sometimes called Austrian Crystal. Crystals can be found in many places in the fashion world including jewelry.

Jewelry from the 1920s drew on the art deco period. The majority of rhinestone jewelry was made with clear rhinestones. The jewelry during the 1930s once again became big and bold with rhinestones being produced in every imaginable color, large stones set on large bold settings was the norm. Because of the impact of the depression and WWII many women did not have the availability of funds to add to their wardrobe so the next best thing was to add a wonderful piece of inexpensive jewelry to spruce up an outfit. Cocktail party circles assumed that the exotically named rhinestone designers of the time — Schiaparelli, Eisenberg or De Mario — exported their dazzling rhinestone necklaces, earrings, barrettes, chokers, bracelets and brooches from Europe. Little did they know that almost all of them were fabricated in Providence, Rhode Island! 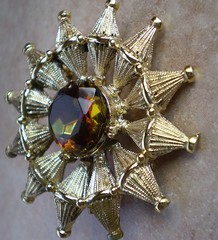 Just because rhinestones are not expensive precious gemstones don’t overlook them in your jewelry collection! I have really begun to appreciate the design work that these lovely alternatives have offered us. Now that I have educated myself about costume jewelry when someone uses the term “junk jewelry” in reference to rhinestone jewelry it really bothers me! Just like anything else there are good and bad pieces out there. Buy and collect jewelry because you like it. Whether it is couture expensive gemstone necklace or a well made rhinestone brooch, jewelry is an expression of who we are as individuals.

Don't forget to sign up below for the weekly newsletter "Bella Gems!"