Josiah Wedgwood is well known for his pottery, especially most famously his jasper color which he perfected in 1774. Jasper is essentially a white body which has the ability to take on any color added to it depending on what metallic oxide was added. Wedgwood used cobalt in various quantities to produce a variety of shades of blue, copper oxide was added to create green jasper and for black, pink and lilac, manganese oxide was used. Oxides could be added to permeate the whole body of a piece or merely the surface color in the form of jasper slip. This is when the clay has been diluted, before adding a white bas relief for decoration. The true color of the ware is only revealed when it has been fired. This material was used for dinnerware, pottery as well as jewelry. 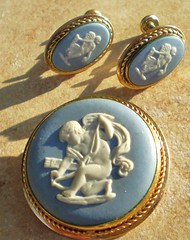 Josiah was the youngest of twelve siblings. He suffered smallpox at the age of eleven that did permanent damage to his right knee. Some years later he had to have the leg amputated and he wore a wooden prosthesis. This prevented him to be part of the family business as they considered him a “cripple”. He overcame this stigma by starting his own business. Besides his love of pottery he also had a passion for science. Many of his friends were scientists. Josiah documented and recorded his experiments in notebooks and in 1783 became Fellow of the Royal Society (of scientists). He was the grandfather of Charles Darwin. Part of Wedgwood's success, lies in the fact that he was very secretive about tests and ingredients of this and other clays he experimented with. Through his tests it has been established that barium sulphate was the important new ingredient in jasper making it different to other clay bodies. Wedgwood would not have the material delivered to his factory, but had it sent to London, where it was ground to a powder in order to conceal its ingredients. It was then shipped to Staffordshire and eased his fears of other companies stealing his invention.

During his distinctive career he designed tableware for Queen Charlotte; wife of King George 3rd in 1762, Josiah became ‘Potter to Her Majesty’. His cream-colored ware became known as Queen’s ware. In 1774 Empress Catherine 2nd of Russia ordered a dinner and dessert service with 952 pieces! Josiah believed in taking care of his workers- he looked after them as a father would. He built housing that workers could live in even after they retire. On the flip-side if a worker was late he would fine them. He was a philanthropic man and gave money to start a local free school in 1759. He also supported building canals and was opposed to slavery. 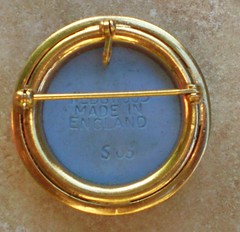 How can you tell if your piece is real Josiah Wedgwood?
· If it is marked & CO. after Wedgwood it is not real Wedgwood this instead is Wedgwood & Co. Ltd.
· If it is spelled WEDGEWOOD It is not real There should be no E between the G & W or used an initial 'J'
· Is should be stamped “Made in England” and may be followed by ID numbers

Wedgwood jewelry is not limited to those described here; they are merely given as examples. As with any other collection, some pieces are rarer and are valued more highly than others. To help in determining which are more valuable, watch auctions and online sales to see the designs that come up more frequently.

Feel free to post any questions you have in the forum or contact me directly. Don’t forget to sign up for Bella Gems!! Jewelry Collecting Newsletter.

Find out more about collectible Wedgwood items- Barnes and Noble:


You Should Also Read:
Caring For Your Vintage Costume Jewelry
Antique or Vintage?
Guilloche- Intricate carvings of yesterday