Guilloche, phonetically pronounced “gi-'lOsh”, comes from the French and means "engine-turning." As seen in jewelry manufacture, this technique entails actually carving a design into a base metal, and then filling the indentions in the design with different colors and opacities of enamel. The term actually refers to the process of engine turning which creates the design not the enameling process. Often, translucent fused glass is applied over an engraved metal surface and the resulting product has a spirograph type of pattern.

  Here is an example of Guilloche

The early Greeks used a primitive form of the process in their temples, when ornaments, which were either painted or carved, were used as decorative bands on vases and other areas in their temples. These patterns consisted of a series of equidistant circles - single, double or triple which wound around and interlaced with each other as decorative effects. Early examples dated to almost 2300 B.C. Most of these have disappeared, but traces are found in some temples, still.

Engine turning machines were first used in the 1500–1600’s on soft materials like ivory and wood and in the 1700’s it was adopted for metal such as gold and silver. The last machines were manufactured around 1948–1949. Hence new items that are reported to be Guilloche are most likely faux. Enameling the Guilloche pattern was first made popular by Peter Carl Fabergé on the Faberge eggs in the 1880’s-they are nevertheless two separate techniques and were not applied to one another until Fabergé. The pattern is engraved, so the reflection of light is enhanced. As the object moves from side to side, its brilliance can be seen. After enameling, decorative accents such as hand-painted roses will often be added to an item. 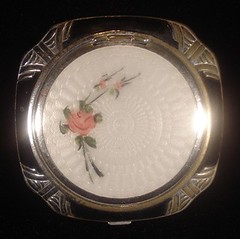 Photo reprinted with permission from Tammy at Vintagerepeats on Etsy

Other places you will find Guilloche are the nose of the Spirit of Saint Louis, architecture and also on banknotes- making it difficult to reproduce or counterfeit currency. Engravings mainly in sterling and some in gold could be found on expensive timepieces such as pocket watches, exclusive pens, jewelry charms, snuffboxes, hair-styling accessories, wine goblets, compacts and other jewelry. Throughout the 20th century enamel and guilloche roses were fashionable and they had experienced a huge burst of popularity during the 1940s and 1950s. Coro, Elgin, ESPO and Vargas were companies which produced these designs in large numbers. Guilloche jewelry remains popular and highly collectible even today.

Don't forget to sign up below for my weekly "Bella Gems!" newsletter.


You Should Also Read:
Jewelry Base Metals
Cameos
Rhinestones – Junk jewelry?? I think not!!