Even though this year's MTV Video Music Awards was rather bland, except for the musical performances, there were still awards given out for excellence in music videos. These awards were voted on by the general public -- aka, the MTV viewers -- so while it should be about which video is actually the best, it does boil down to a fan-based popularity contest.

Suprisingly, most of the winners were not the ones that were heavily favored going into the night. Those who were nominated for multiple awards were lucky if they walked away with one. When the show was over, only two artists, James Blunt and Gnarls Barkley, had multiple awards. The rest were doled out at one a piece, mostly to underdogs or newcomers.

Lil Kim was the evening's first presenter, and she mocked her recent prison stint by coming out dressed in an orange jumpsuit and flanked by an escort of officers. She stripped to reveal a suit that was actually very tasteful -- a far cry from previous appearances where she seemingly found new uses for dental floss and pasties.

Show host Jack Black presented one award himself, kneeling before a stunning Beyonce as if offering a queen her crown. She giggled and quickly grabbed the award.

The cast of Jackass presented the Viewer's Choice Award to the band Fall Out Boy. This award had been voted on during the show via online and phone, and as the band took the stage, Patrick Stump was hoisted up onto the shoulders of Jackass' Wee Man and carried offstage. 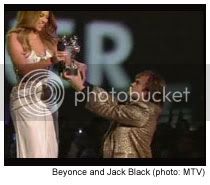 Kanye West presented the Video Vanguard award to rap video director Hype Williams. Williams was also honored by a musical medley by rappers Busta Rhymes and Missy Elliott, both of whom have had videos directed by him.

Panic! At the Disco received the last award of the night, but it didn't happen without incident. As they walked onstage to accept the Moonman (MTV's name for their VMA statues) from presenter Jennifer Lopez, a man jumped up from the audience pit and intercepted the microphone. Announcing himself as "Six," he yelled out, "MTV never gave me a show!" before he was escorted offstage. Lopez tried to play it off, joking "That was planned."

You can read the rest of my show recap here. But for those waiting for the complete list of winners, here you go:

Video of the Year: Panic! At the Disco / "I Write Sins Not Tragedies"

Best Female Video: Kelly Clarkson / "Because of You"

Ringtone of the Year: Fort Minor / "Where'd You Go"

Saw the show and want to comment? Talk about it on our message boards.

Didn't see it? MTV is sure to rerun this show a gazillion times, but you can also see the whole show online at MTV.com. Beware, though, the highly-touted backstage footage has more footage of the MTV hosts talking than anything that actually went on.

All photos are courtesy of MTV and used for editorial purposes only.

Entertainment News Forum-come and discuss the latest headlines of your favorite movies, shows, and celebrities!