Les Journees du Patrimoine arrive soon after the back to school rush of la rentree. Come mid September secret gardens are opened and the public is invited to peek behind doors that remain closed the other 363 days of the year. As if a genie has granted an open sesame in Paris, many of the majestic old estates, hotels particuliers, and public buildings like the Palais d l’Elysee and Palais Royal invite the public within to share in the patrimonial richness.

Those steadfast enough to brave queues that can stretch on for hours are granted admission into the country’s most exclusive addresses. In addition, many museums also waive or reduce admission charges to celebrate and guided walking tours are led through quartiers like the marais and saint germain de pres for nominal charges.

I opted for a glimpse into President Nicholas Sarkozy and his model/musician/wife Carla Bruni’s home. Inside the Palais d l’Elysee the line snaked through gilded sitting rooms with french doors onto the sprawling green presidential lawn, and never ending stretches of table offered places for phantom dignitaries in the state room. Inside the salle des fetes the table was set with the Republique Francaise monogram china and goblets. Cranberry velvet curtains, tapistry patterned carpet and heaping sprays of roses or sunflowers rounded out the royal atmosphere. 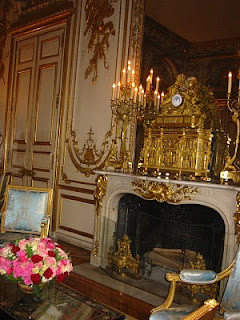 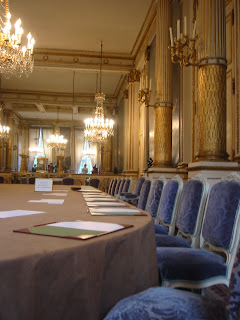 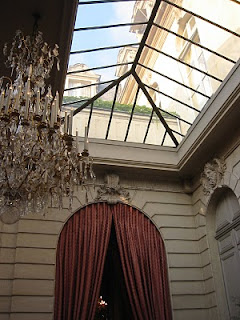 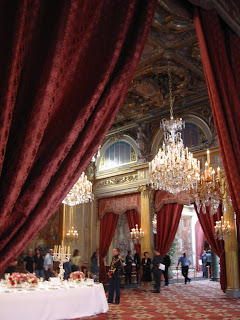 On another occasion I was able to access the lavish state rooms of the Palais Royal which once upon a time was the residence of Louis XIV. Now it serves as constitutional and cultural office space. I relished details Bonaparte left behind like golden fingerprints and Henri Martin’s oil painting Agriculture, Commerce, Industry, Intellectual Work that the four walls of the General Assembly room wear. 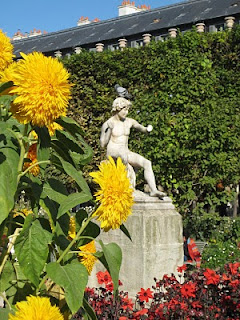 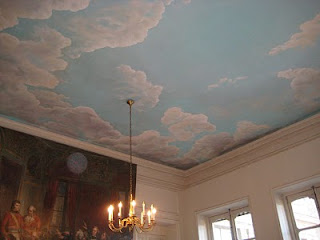 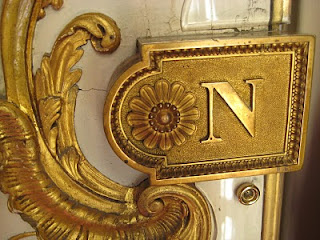 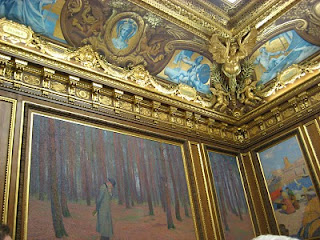 To choose wisely which line you’ll stand in come the weekend of the 17th-18th of September visit the Jounees du Patrimoine site to consider your options. Here is what’s on offer in Paris.