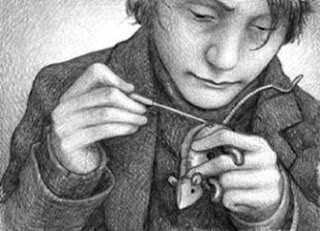 Like so many other child protagonists who find themselves orphaned (James from James and the Giant Peach, the Baudelaire children in An Unfortunate Series of Events) Hugo has been entrusted to a cold extended family member. From his uncle he learns the art of winding the clocks encrusted in the walls of the Paris Gare de l’Ouest train station (where the Montparnasse tower now stands). When his caretaker fails to return to their bird’s nest hovel in the station, Hugo begins to tend to the winding. He hopes that nobody will notice anything has changed preferring the life he knows to the possibility of being uprooted again.

In the mean time he is determined to repair an automaton that he was able to salvage from the debris of the museum fire, the very machine his father was working on the night of his death. Hugo believes that the robot, poised with pen in hand, when mended will deliver a posthumous message from his father. Throughout the years he has filled the pages of his journal with notes and diagrams, observations and knowledge passed down from father to son, which he puts to practice working on the reparations. 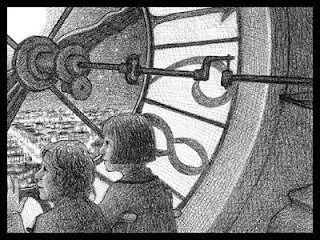 Resorting to petty thievery he keeps himself fed on croissants swiped from the station café and pockets mechanical toys to amass the parts he needs to restore the automaton. Caught red handed, the shopkeeper seizes his journal and forces Hugo to repay his debt by tending the toyshop. From here the story unfolds as the shopkeeper’s niece Isabella becomes his friend and accomplice.

Broken into two parts, the text is accompanied by a wealth of pencil sketches that won the author and illustrator Brian Selznick the first Caldecott medal awarded to a novel. I had initially ordered the book for myself but shared the first section with my second grade class, children seven to eight years old. They so appreciated following Hugo’s adventures that they begged for the next chapter and cheered when I announced that time remained to dive back into the story. It is appropriate independent reading for upper elementary children but equally entertaining for adults.
A 3-D film of the story is being produced by Martin Scorsesee and is slated for release in December 2011.