Buttons at the Bismark

Fabricated in pearl that glistens, black that disappears, knobs of weathered leather or any rainbow hue, I fish them out of the small zip bags that come attached to blouses and skirts where they are accompanied by thread. I sort them, hoard them, display them and use them to embellish or repair. As jewelry is passed down from one generation to another so are buttons. I have those that belonged both to my husband’s mother and grandmother. 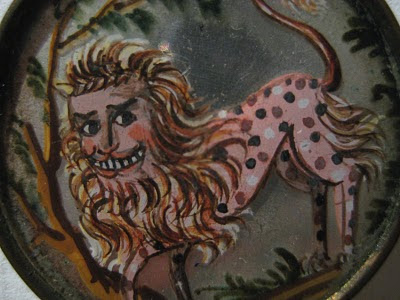 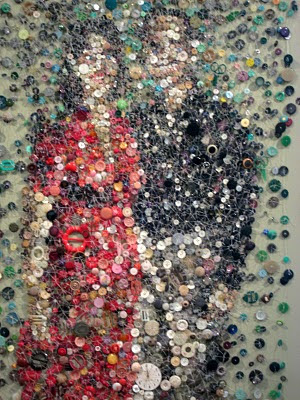 I’m not alone in treasuring buttons. This summer the Mona Bismarck Foundation is hosting an exhibit on the subject. Through Loic Allio’s collection lineage of the button is traced from the Middle Ages to the peak of its craftsmanship in the 18th century when nobility began to take an interest in hand painting them as pastime. As such, button faces became unique works of art displaying fairytale beasts, floral sprays and even foreign cities. Further down the line sketch books reveal requested embellishments from fashion houses as buttons became mass produced.

Also part of the exhibit are photos taken at the New York shop Tender Buttons where black and white checkered floors unroll from beneath shelves hosting a limitless catalogue of buttons for sale in drawer after thin drawer. Another display explains the research Penny Leaver Green has performed in establishing that a true phobia of buttons does exist in the hearts of some called fibulanophobie. She asked those that suffer from this phenomenon to attribute levels of disgust to different types and forms of buttons such as the four holed variety which was seen as harboring dirt.

The last room, my favorite, features buttons recycled unconventionally into sculpture and collage by artist Lisa Kokin who says she is “interested in representing the human condition by using the objects we leave behind.” A dog’s head in shades of beige sits on the mantle of the marble fireplace. On the adjacent wall hangs a tapestry where wire joins buttons like stipples in a Pointillist painting to paint the portrait of a woman and child holding hands. When she catches sight of it the blue-eyed, curly headed girl says, “Come see the curtain. C’est merveilleuse! C’est magnifique, non?” 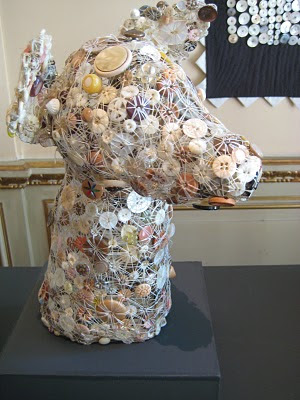 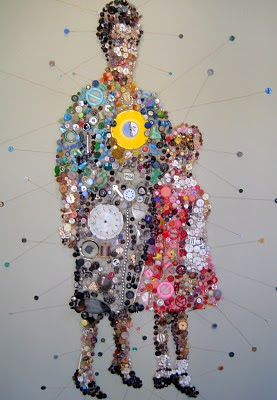 Exhibited through august 14th noon to 6:30(except Sundays, Mondays and holidays)
At the Mona Bismarck Foundation in Paris at 34 avenue de New York in the 16th
Admission is free.

I always enjoy visiting this space that sits at the base of an ancient apartment building across river from the Eiffel tower. When I walk inside it’s regal and I like to imagine it my home. Past exhibitions include Margaret Mead’s scientific drawings to catalogue wildflowers. Check their website for the latest exhibits.

You Should Also Read:
The Mona Bismarck Foundation