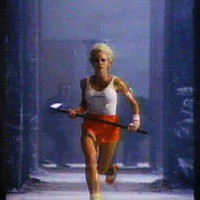 Fade in. A translucent tunnel in a concrete abyss. Blank-faced prisoners marching forward. Telescreens intoning an Orwellian sermon: “Today we celebrate the first glorious anniversary of the Information Purification Directives … ” Blink and you’ll miss the tanned athlete running toward you with a sledgehammer in her hand. Masked guards are chasing her.

Apple’s most famous television commercial aired during Super Bowl XVIII on January 22, 1984. No one apparently remembers the game, but the ad had viewers at “today,” as dystopian settings are wont to do.

Those who had read George Orwell’s best-known novel had probably been waiting for years to riff off it when the time came. Certainly that was true of Chiat/Day, Apple’s advertising agency. According to a former Apple engineer writing on folklore.org, the agency developed the idea at the end of 1982. They proposed to use it in the Wall Street Journal to advertise the Apple II, but the company declined. Then the Macintosh was born, and Steve Jobs proclaimed that it would revolutionize personal computing. He wanted an ad campaign to match, and he loved the agency’s concept.

No less than Ridley Scott, fresh off the cult film Blade Runner, was hired to direct. Shot in London, the ad featured a cast of 200, including skinheads as the docile citizens and platinum-haired Anya Major as the rogue runner. The budget reportedly ran to $900,000, but no one seemed to be counting.

Shown a rough cut, the Macintosh team continued to love the ad. It was subtle but assertive. At the end of the dramatic scenes, the tag line simply declared: “On January 24th, Apple Computer will introduce Macintosh. And you’ll see why 1984 won’t be like 1984.” What was not to love?

The board of directors hated it. One purportedly said it was the worst commercial he had ever seen.

The problem was, Apple had already bought air time from CBS. According to a Feb. 27 Infoworld article that year, Steve Wozniak, Apple’s other co-founder, finally told Jobs, “Hey, let’s put up our own money to get this thing shown.” He predicted, correctly, that far from being the worst, it was the kind of ad that would win awards. Luckily for viewers, Apple’s marketing department ignored the board and okayed the spot anyway.

Sure enough, at the board meeting the following week, the directors gave the Macintosh staff a standing ovation and an an apology. The commercial won the year’s Clio Awards and the Cannes Lions Grand Prix, and it has resided in several advertising top spots and halls of fame ever since.

Unfortunately, that was only half of the controversy surrounding the ad. According to the Dartmouth Law Journal in 2009, the commercial was also “a flagrant infringement of copyright and trademark laws.”

Apparently, Orwell’s vaunted novel is under U.S. copyright until 2044. In 1980, Marvin Roseblum, who planned to make a film version of the book, bought the television and movie rights from Orwell’s widow Sonia. So, in the year 1984, no one else was allowed to profit from films derived from the novel 1984, such as a television commercial set in a totalitarian society in which a Big Brother figure (David Graham) drones on about “Unification of Thoughts” and threatens, “We shall prevail!”

Apple was definitely profiting. Rosenblum warned them to “cease and desist” from running the spot ever again. The company complied, of course. The ad had aired several times before the Super Bowl, including in a shorter version before cinema previews. However, Apple never aired it again. To do so would be to invite a lawsuit they were sure to lose. This move, of course, only made the ad more desirable to viewers. Thank goodness for YouTube.

Ultimately, the 1984 Macintosh ad may be memorable for capturing, not Orwell’s vision, but Apple’s attitude toward the establishment. They didn’t check for copyrights beforehand; they ignored their board of directors; they threw the Macintosh at the great “Big Blue,” IBM. They ran straight toward us, shattering our conviction that we would never own a cute little personal computer. They prevailed.


You Should Also Read:
Dystopian - Apocalyptic - Post-Apocalyptic Novels
Utopia vs Dystopia in Literary Fiction
How to Write Irresistible Ad Copy