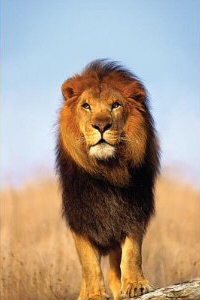 African Cats was filmed entirely in the Masai Mara located in Kenya. This film follows an African lion pride, the River Pride, led by the aging alpha male Fang. In this pride are:

Layla, mother to Mara, her female cub
Malika (means Angel in Swahili), Layla's sister
Other lionesses and their cubs

Threatening the River Pride are Kali (meaning Fierce in Swahili) and his four sons. They are intent on getting rid of Fang and taking over the River Pride.

This story is interwoven with the story of Sita (means Six in Swahili). Sita is a cheetah with five young cubs and is billed as a single mother. Sita tries to raise her cubs on her own often leaving them alone while she hunts for food. Sita also single handedly fends off threats like spotted hyenas and even Kali and his sons.

The movie starts out with the wildebeest migration and food being plentiful for all. We see both the River Pride and Sita take down prey to feed their respective families. The hunting and feeding scenes have been sanitized since African Cats is rated G. There are many panoramic views of the savanna and amazing close ups of the lions, cheetahs along with crocodiles, birds, hyenas, gazelle, zebra, giraffe, elephants, and other animals.

We get to learn about how the lions live together and rely on each other contrasted with the independent cheetah who is a solitary cat relying on no one. I watched this movie wondering if the cheetah cubs were going to make it to adulthood, if Kali and his sons were going to take over the River Pride and kill all of Fang's cubs. The narration of Samuel L. Jackson helps to create the fear for these cats' survival and also educate us on how they live, raise their young, and even die.

Be sure to watch the credits. The other animals in this movie are shown along with their names and something else I'm not going to divulge here, but is worth staying in your seat for.

In the first week of release, Disney Nature is making a donation to the African Wildlife Fund for each ticket sold. They are pledging a donation of at least $10,000.

I definitely recommend this movie. I learned a lot about both the African lions and the cheetah. You can feel free to bring your children to this movie since the hunting and eating scenes are not very gory, although you will see a couple of cats with some blood on their faces after they have eaten.

My ticket for this movie was purchased by me with my own funds.


You Should Also Read:
African Lion Facts
Cheetah Facts
The Ghost and the Darkness - Movie Review