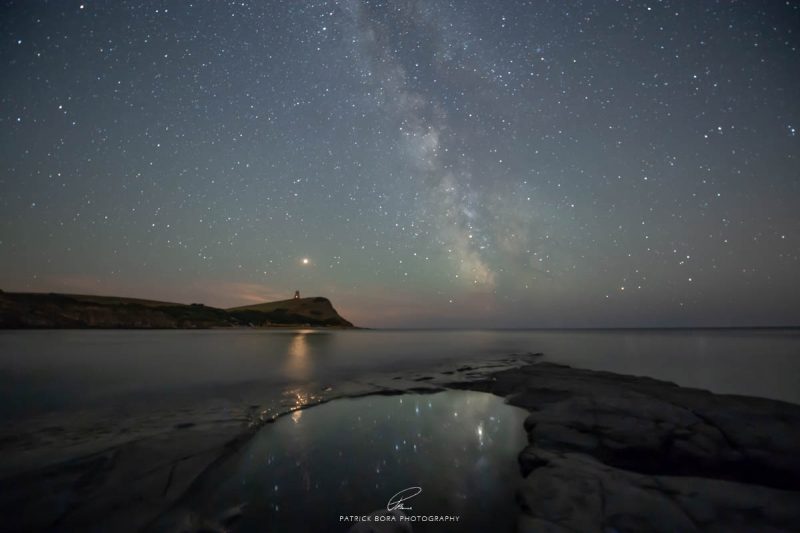 The milky clouds in the sky are actually the edge of the Milky Way. [Photo: Patrick Bora]

A galaxy is a collection of stars and their planetary systems, gas and dust, and dark matter. Gravity holds it all together. Our galaxy is called the Milky Way.


This article has some links to pictures. If you click on the link, you can come back to the article by clicking the back arrow on the navigation bar.
The Milky Way Galaxy is also called “the Galaxy”.
The Milky Way isn’t the only galaxy. There are billions of them, but a century ago people didn’t know that. If we capitalize Galaxy, it means the Milky Way Galaxy.

The Milky Way is big.
There are galaxies much bigger than the Milky Way, but it has probably between 200 billion and 400 billion stars. That's a lot.

The Milky Way is a spiral galaxy with a disk, a bulge, a nucleus and a halo.
We can’t get outside the Galaxy to see it, but it might look something like this galaxy NGC 6744. And here is an edge-on diagram of a spiral galaxy. [Photo NGC 6744: Daniel Verschatse]

The Galaxy has a flat disk.
The disk is about a thousand light years thick. Since a light year is about ten trillion kilometers (six trillion miles), that may not sound very flat. But the diameter of the disk is 150,000-200,000 light years, so it is shaped rather like a giant CD. The spiral arms are in the disk – that's where we live.

New stars are being born in the spiral arms.
The hottest young stars are blue and they give the spiral arms a blue color. There are also lanes of dust in the disk. The dust hides the Galactic Center from us, but dust is the material for making new stars. (The central part of a galaxy is called the nucleus.)

In the middle of the disk is the bulge and the nucleus.
The bulge is a slightly squashed ball of stars about 13,000 light years across. The bulge stars are older than the disk stars. For example, the Sun is five billion years old, but the stars in the bulge are at least seven billion years old. In the nucleus, the Galactic Center hides a black hole with over four million times the mass of the Sun. We can’t see it, but we know it's there because its gravity affects stars that we can see.

The halo is a ball of stars and globular clusters surrounding the Galaxy.
A globular cluster is a large collection of stars whose gravity pulls them into the shape of a globe. The halo stars are the oldest in the Galaxy, at least 12 billion years old.

It’s made of stars!
When we look at the constellations, we are looking out of the disk to stars in our part of the Galaxy. But from a dark place we can see the Galaxy’s disk edge-on. It looks like a milky white band dividing the sky, and this bit has traditionally also been called the Milky Way. In this picture, you can see the the arch of the Milky Way and under it, the Magellanic Clouds. In 1610 Galileo looked at it through his new telescope and was the first person to realize that it was made of stars. [Photo: Jingyi Zhang]