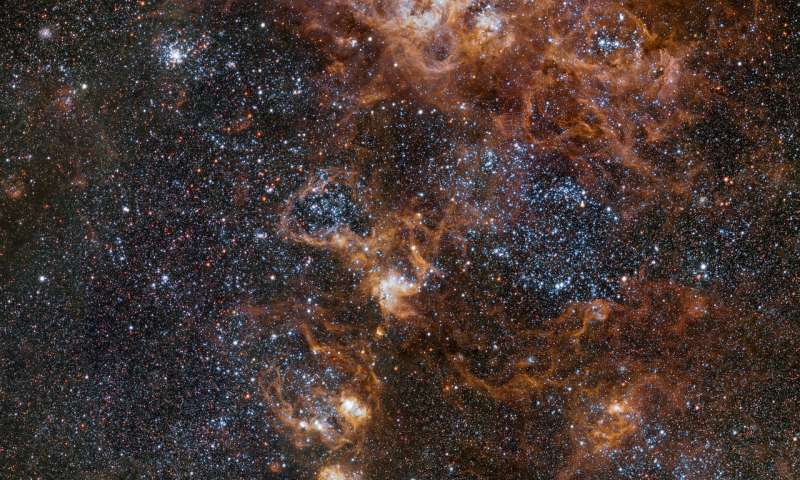 Human astronauts are more photogenic, but insects and arachnids have also been to space. There are also some heavenly objects named for them.

Space travelers
You may be surprised to learn that the first Earth creature in space was not a dog, but a fruit fly. In order to examine the effects of radiation on living things, in 1947 the US sent a V-2 rocket over 100 km above Earth, to the edge of space. The capsule with the biological samples parachuted back to Earth and the flies were unharmed by their experience.

Early Shuttle flights and the Soviet Bion flights of the 1990s also carried mini-beasts. In 2003 Columbia's tragic last flight had a number of school experiments. They included observations of carpenter bees and harvester ants, as well as Garden Orb spiders.

In 2006 Bigelow Aerospace was the first private company to put animals into space. Their experiments involved a variety of small creatures such as Madagascar hissing cockroaches, harvester ants, and rock scorpions. (Scorpions, like spiders, are arachnids.)

A number of spiders have travelled into space. There's a link at the end of this article to their story.

Flies and ants
Ants and flies are unwelcome at picnics, but there's no problem with the heavenly versions.

The nebula Menzel 3 – popularly known as the Ant Nebula – is about 8000 light years from Earth in the southern constellation Norma. I usually don't see the resemblance between a nebula and its popular name, but this one does remind me of the head and thorax of an ant.

Menzel 3 is a planetary nebula, which has nothing to do with planets. Many of these nebulae are spherical, and eighteenth century astronomer William Herschel thought they looked similar to planets in the telescope. Today we know that such a nebula is formed by dying sunlike stars ejecting material from their outer layers.

Planetary nebulae come in all sorts of shapes. Some of them are bipolar, i.e., they have two lobes. They may be formed by binary stars. Astronomers think that the Ant Nebula surrounds a white dwarf with a giant companion star.

There is no fruit fly constellation, but there is a small, dim southern constellation called Musca (the fly). It was one of the constellations invented in the sixteenth century by Dutch navigators Keyser and de Houtman, based on their observations in the East Indies. There was some confusion about the name in past centuries, and it has also been called Apis and depicted as a bee.

None of Musca's stars is named and only one of them is brighter than third magnitude. It does contain the Hourglass Nebula (MyCn 18), another bipolar planetary nebula, which looks like two joined rings with an eye in the middle.

For a time Musca was called Musca Australis because there was also a northern fly Musca Borealis. It had only four stars and when it was later merged with Aries, “Musca Australis” was shortened to Musca.

Scorpion
The best known heavenly arachnid is the constellation Scorpius. It's been identified as a scorpion since Sumerian times over 5000 years ago. The hook of stars looks very much like a Scorpion's tail.

The brightest star of Scorpius is Antares, the “Heart of the Scorpion”, a supergiant with noticeable red-orange color. If Antares were where our Sun is, it would extend well into the asteroid belt.

Scorpius contains a number of deep-sky objects, including the Butterfly Cluster.

Butterflies
The Butterfly Cluster (NGC 6405) is an open cluster around 1600 light years away. It got its name because it was thought to resemble a butterfly. Although it contains quite a number of hot blue stars, the cluster's brightest star is the orange giant BM Scorpii.

One of my favorite nebulae is the beautiful Butterfly Nebula (NGC 6302). It's a splendid planetary nebula in the constellation Ophiuchus about 2100 light years away. Like the Ant Nebula, it's bipolar but you can see its shape is quite different.

The Red Spider Nebula (NGC 6537) is a bipolar planetary nebula with a highly complex structure. The white dwarf at its heart, probably part of a binary system, is one of the hottest white dwarfs ever seen. Hidden in its dust shell, it produces powerful winds which contribute to the nebula's shape.

The Tarantula Nebula (30 Doradus) is a quite different type of nebula, a massive star-forming region. It's the largest and most active one that we know of in the Local Group of galaxies. The nebula is an emission nebula, because hot young stars emit radiation that energizes hydrogen gas and makes it glow.

Although the Tarantula Nebula is visible to the unaided eye, it's 170,000 light years away in the galaxy called the Large Magellanic Cloud. The Orion Nebula — our nearest star-forming region — is about 1340 light years away. If the Tarantula Nebula were in the Orion Nebula's place, not only would it cover an extensive area of sky, it would be bright enough to cast shadows.


You Should Also Read:
Spiders in Space
Nebulae
Constellation or Asterism