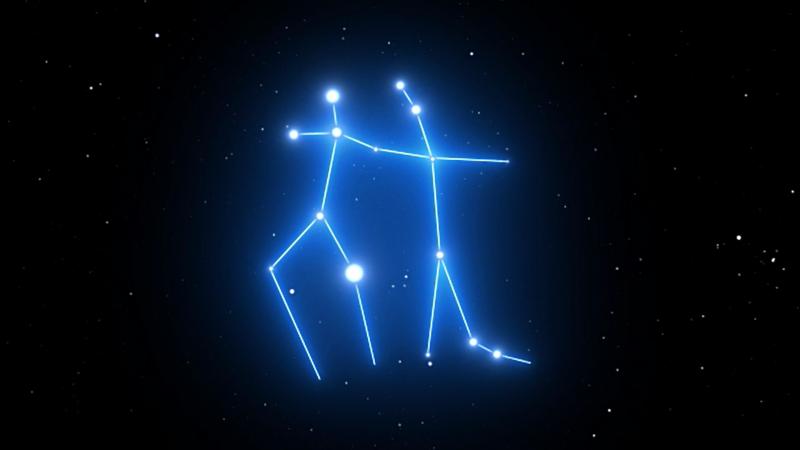 Gemini is a zodiac constellation whose most prominent feature is a pair of bright stars. Many cultures have seen these stars as celestial twins, and we know them as Castor and Pollux. You can most easily see them in midwinter in the northern hemisphere because Gemini is high in the sky and just to the northeast of Orion.

The ancient myths
Thousands of years ago Gemini's two brightest stars represented the Great Twins. The Babylonians worshiped them as minor gods. However most of the myths we know today came from the ancient Greeks who called them Castor and Polydeuces. (Pollux is the Latin form of Polydeuces.) Here is one of the many stories about them.

Leda, the queen of Sparta, gave birth to quadruplets – two boys, Castor and Polydeuces, and two girls, Helen and Clytemnestra. Castor and Clytemnestra were the offspring of Leda's husband, King Tyndareus. However Polydeuces and Helen (later known as Helen of Troy) were fathered by the god Zeus who, in the form of a swan, had seduced Leda.

From the start Castor and Polydeuces were best friends and inseparable in all their adventures. Their teacher and mentor was the great centaur Chiron. They were very athletic, with Polydeuces a champion boxer and Castor widely known for his horsemanship. One of their adventures was to join the Argonauts to help Jason in his search for the golden fleece. They also fought in the Trojan War.

Sadly, although Polydeuces was immortal, Castor was not. Stories differ about how Castor was killed, but all agree that his brother was distraught. He begged his father to make Castor immortal and reunite them. Zeus put them both into the sky as stars and there they remain together forever.

The stars
Pollux is an orange giant star, and is one of several stars in Gemini known to have a planet. The planet, over twice the size of Jupiter, was called Pollux b, but has now been named Thestias. This was the name of the twins mother in Greek mythology. As the brightest star in Gemini, it's slightly confusing that in the Bayer classification Pollux is designated Beta Geminorum, and Castor is the alpha star. (To find out more about Bayer classification, see “Naming Stars” – there's a link below this article.)

The “twin” of Pollux is quite a contrast. Castor is a star system of six stars. You can see Castor A and B through a small telescope. They are bright white stars orbiting fairly close together. It's also possible to see the fainter and more distant Castor C. Castor A and B each have an unseen companion that can only be detected with special equipment. Castor C is actually a pair of red dwarf stars.

Although Castor and Pollux are the brightest of Gemini's stars, there are another 83 visible to the unaided eye under dark skies. One that is fairly easy to see is Zeta Geminorum, known traditionally as Mekbuda. Mekbuda is a luminous supergiant over two hundred thousand times the size of the Sun. It's also a variable star of the type called a classical Cepheid.

A Cepheid variable expands and contracts in a regular way. As it does so, its brightness also increases and decreases. American astronomer Henrietta Leavitt discovered the relationship between the period over which a Cepheid's apparent brightness varies and its actual brightness. This understanding means you can work out the distances to such stars and the galaxies that contain them.

Deep-sky objects
One of the best known of Gemini's deep-sky objects is the planetary nebula NGC 2932. Its popular name is the Eskimo Nebula because it resembles someone wearing a furry parka. A planetary nebula isn't related to planets. It's formed when a dying sunlike star throws off its outer layers. Some of these nebulae appear to be spherical like a planet when seen in eighteenth century telescopes, so William Herschel called them planetary nebulae.

If you look close to Castor's foot, near Gemini's border with Taurus, you should be able to find Messier object M35. It's an open star cluster containing nearly two hundred stars. All of the stars formed from the same nebula, and are only loosely bound together by gravity. M35 can be seen as a fuzzy patch with the unaided eye, but even a small telescope shows individual stars.

Perhaps the most unusual object in Gemini is the Geminga pulsar. A pulsar is a rapidly-rotating neutron star sending out a beam of radio waves. As a lighthouse seems to emit a light pulse each time it turns our way, so a pulsar seems to give out a radio pulse. Neutron stars are the superdense remains of massive stars that exploded as supernovae after running out of fuel.

A pulsar is a pretty strange object to begin with. Geminga is even stranger, because it doesn't emit radio waves. It was first detected because it's a gamma ray source. There was great confusion, because no one could connect the gamma ray source to any astronomical object. It took twenty years to do that. “Geminga” is short for “Gemini gamma ray source”, but apparently it also means “it's not there” in one Italian dialect.

The Geminids
I couldn't end our little tour of Gemini without mentioning the Geminids. This is one of the year's best meteor showers, peaking on December 13-14. Most meteor showers occur as Earth's orbit takes it through a stream of debris left by a comet. The Geminids are the result of the debris left by the unusual asteroid 3200 Phaeton. It's a rich shower, easily matching or exceeding the rate of the summer Perseids, even though it's much colder for observing.

You Should Also Read:
Naming Stars
Geminids - a December Spectacle
ABC of Astronomy - D Is for Double Star