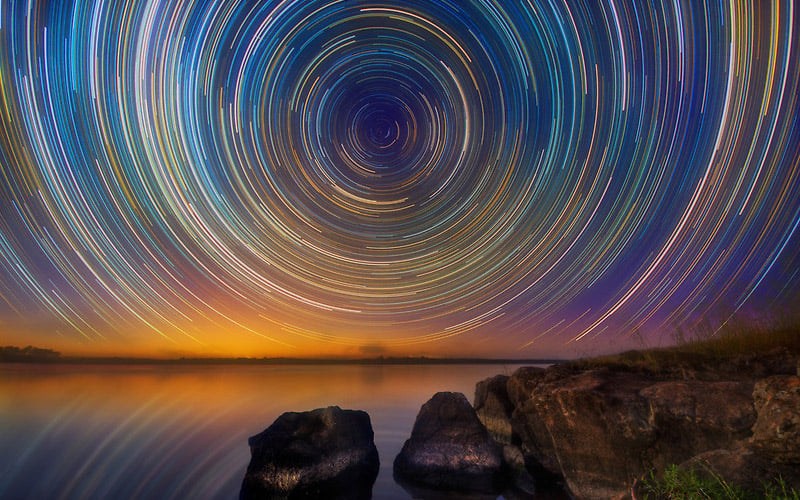 Telescopes had let astronomy make great advances, but even by the 19th century, astronomy was still very much a science involved with mapping and simple classification. There wasn't really any way of finding out more without some new tools.

Fortunately, in the early 19th century many people were experimenting with light-sensitive materials in an attempt to make pictures. French artist and chemist Louis Daguerre was the first to make public a successful process. Daguerreotypes, as they were called, were photographs on copper plates. Despite the long exposure times and highly toxic chemicals needed, they were enduring and detailed.

Although John William Draper is considered to be the first astrophotographer, he wasn't the last one in his family. His son Henry was also a passionate astrophotographer. John Draper hadn't found the Moon an easy target, but at least it's a bright object. Henry had a more ambitious target: the Orion Nebula.

A nebula is a giant cloud of gas and dust stretching through the space between stars. Even though it has no light of its own, it may be illuminated by nearby stars. The unaided eye can see the Orion Nebula as a faint fuzzy blob, but for detail you need a telescope.

Henry Draper took the first picture of the Orion Nebula in 1880. In order to capture the gas, the bright stars ended up overexposed and to modern eyes the picture doesn't look like the exceptional achievement that it was. Photographing a dim object in the dark was going to be tricky, needing an extra-long exposure time. If that object is in the sky, it's even harder. Since the Earth is turning on its axis, you are effectively trying to photograph something that's moving. Somehow you have to make sure that the telescope keeps pointing at the object being photographed – this is known as tracking.

If the telescope doesn't track, the picture will be full of blurred star movement. However, occasionally, capturing "star trails" is actually the whole point of the picture. The header image is an excellent example of this.

Just three years on from Draper's photograph of the Orion Nebula, English astronomer A. A. Common produced a picture of the Orion Nebula for which he was awarded the Gold Medal of the Royal Astronomical Society in London. Not only is there greater definition, but the long exposure shows detail – including stars – too faint for the human eye to detect.

Henry Draper had already tried out a new aspect of astrophotography. In 1872 he took the first picture of a star's light spectrum, that of Vega. Starlight is a mixture of light colors. With a spectroscope, it can be broken up into a spectrum to show these colors. There is also a series of narrow lines crossing the spectrum. These lines tell us a good deal about the star, including its temperature and what it's made of. Spectroscopy was in its infancy in the late nineteenth century, but Draper saw its potential for astronomy. He intended to compile a star catalog in which the stars were classified by their spectra.

Sadly, even though Draper went on to photograph another fifty light spectra, he died when he was only 45, leaving his project unfinished. But that wasn't the end of it. His widow Anna was a remarkable woman, described as being as much at ease working with her husband in the laboratory as she was being a society hostess. She donated money to Harvard Observatory to complete the star catalog.

Most of the classification for the Henry Draper catalog – three quarters of a million stars – was done by the intrepid Annie Jump Cannon. If you see a star referred to by an HD number, that is its number in the Henry Draper Catalog.

By the end of the century, astrophotography was a tool for making star maps, such as the Carte du Ciel (Map of the Sky) project. The map was never made, but there is an enormous collection of useful photographs showing the positions of millions of stars, including quite faint ones.

Yet there was a development even more important than making star maps and discovering objects too faint for the human eye. This was, as Henry Draper had realized, the study of the spectra of stars. Photography and spectroscopy together were the key to moving astronomy from locating stars to understanding them. Astronomy might have been where celestial objects were. Now, at last, it could be possible to learn what they were. Astrophysics was born.