11 Events that Happened on November 11

1880
Ned Kelly, legendary Australian outlaw, was hanged in Melbourne. He was a bushranger known to authorities as a horse thief, an armed robber, a killer of policemen, and the leader of a notorious gang. The subject of more biographies than any other Australian, he equally fascinates those who regard him as a murderer and those who admire him as a folk hero. When executed, he was only 25.

1911
The Great Blue Norther created freakish weather around the Midwest on 11/11/11, itself a freaky date! It was a cold snap that set record highs and lows in many cities, some of which have remained unbroken. In Springfield, Missouri, it was 80°F at 3:45 p.m., but 15 minutes later the temperature had plunged to 40°F! It continued to drop to a record low of 13°F, creating a difference of 67 degrees in 10 hours.

1918
The Armistice made things all quiet on the Western Front of World War I. It was signed in a railway carriage in Paris and took effect at 11 a.m. – “the eleventh hour of the eleventh day of the eleventh month.” Although an armistice is technically a truce, the Germans were, in fact, surrendering to the Allies. The war had raged for four years, causing 17 million deaths, 20 million casualties, and severe trauma for its survivors and their families.

1941
The prototype of the Jeep, called the Willys MB, made its debut in Toledo, Ohio. It was funded by the U.S. Army, which was already preparing to become unavoidably involved in World War II. The origin of the 4x4’s name is a subject of debate, but it’s not “General Purpose” as is usually reported. Some even believe it was named after Eugene the Jeep, a supernatural character in the Popeye comic strip.

1951
The first demonstration of a videotape recorder was given in Los Angeles. It was done by Bing Crosby’s production company, and the machine displayed blurry images recorded on modified quarter-inch audio tape. An improved version presented the following year showed grainy pictures as if from a worn-out movie reel. Today, of course, the word “videotape” itself is a relic!

1955
Jigme Singye Wangchuck, the 4th Dragon King of Bhutan, was born in the capital city of Thimphu. The world’s youngest monarch when crowned at age 16, he continued the work his father had begun in modernizing the kingdom. Hotels, television, and the Internet have made their debut in the Himalayan state, but traffic lights have yet to be allowed. It was King Jigme who came up with the measurement system of Gross National Happiness in place of the GDP. He abdicated in favor of his oldest son in 2006. 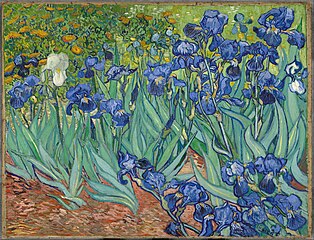 Vincent Van Gogh’s Irises sold for 53.9 million dollars, setting a two-and-a-half-year record for the most expensive painting ever sold. It was painted in 1889, possibly the first of almost 130 works that the troubled Dutch artist produced during his stay in a French asylum the year before the died. You can now view the painting for yourself at the Getty Museum in Los Angeles. (Image linked from Wikipedia)

2004
Palestinian statesman Yasser Arafat died at age 75. As the chairman of the Palestine Liberation Organization, Arafat became willing to negotiate for peace with Israel. In 1994 he was awarded the Nobel Peace Prize together with Israeli leaders Yitzak Rabin and Shimon Perez, and he became the first president of the Palestine National Authority. Whether viewed with respect or otherwise, Arafat embodied the Palestinian people’s quest for freedom throughout his career as a stateless head of state.

2015
Our last event is happening as I write this article. Diwali falls on November 11 in 2015. A Hindu movable feast day, Diwali (also called Deepavali) is a festival of lights commemorating events in the Ramayana epic: the return of Rama to his kingdom after the rescue of his wife Sita and the defeat of her kidnapper Ravana. Because Rama is not a deity, prayers are offered to Lakshmi, the goddess of wealth, for a prosperous new year. Homes are decorated with lamps and lights, and prayers are followed by firecrackers and sparklers.