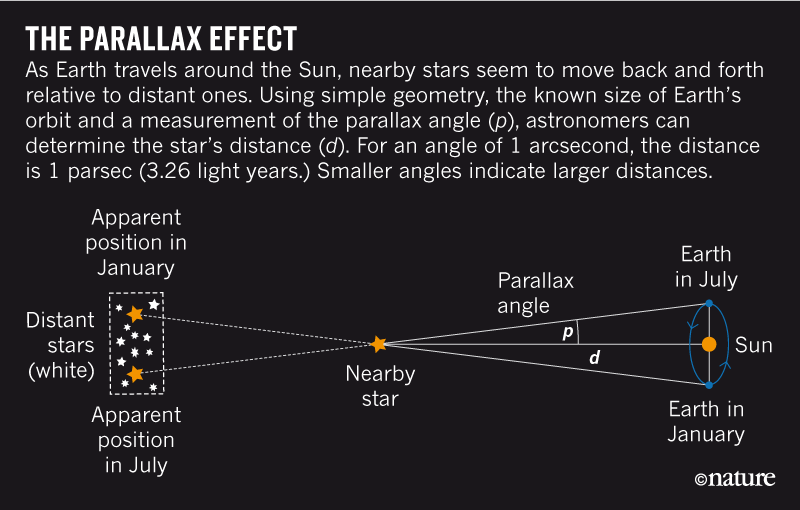 Can you see farther by day or by night? If you said “night,” you’re right! By day, we can see for 93 million miles (150 million kilometers) - the distance to the Sun. But at night the view seems endless.

The nearest stars of night are hundreds of thousands of times farther off than the Sun. Astronomers have abandoned puny measures like miles and kilometers for such great distances. Instead they use units called light years and parsecs.

Light years
Despite its name, a light year is a measure of distance, not time. It’s how far a beam of light travels in one year, and it’s equivalent to a staggering 5.88 trillion miles (9.46 trillion kilometers).

Light zips through space at 186,000 miles (300,000 kilometers) every second. It takes just over one second to hop to us from the Moon, 8.3 minutes to get here from the Sun - and 4.3 years to journey from the nearest naked-eye star, Alpha Centauri. Therefore astronomers say that Alpha Centauri is 4.3 light years away. Sirius, the brightest star in the night sky, is only 8.6 light years away, but the most distant stars visible to the unaided eye are thousands of light years away.

All the stars we see at night are within our own home galaxy, known as the Milky Way. The Milky Way is also the name for the band of faint stars that can be seen crossing the sky on clear nights. Astronomers estimate that our Galaxy is about 100,000 light years wide, and we are about 26,000 light years from its center.

We can see beyond the Galaxy without a telescope, too. In the southern half of the sky lie two small satellite galaxies called the Magellanic Clouds, about 160,000 and 200,000 light years away. They are both visible to the unaided eye, looking like scraps torn from the Milky Way.

And in the northern constellation of Andromeda lies the Andromeda Galaxy, visible as an elongated smudge of light in clear, dark skies. At a distance of 2.5 million light years, it is the most distant object visible to the unaided eye.

When we look at far-off objects, we are also looking back in time. In the case of the Andromeda Galaxy, for example, the light we are seeing now left there 2.5 million years ago, when our ape-like ancestors were roaming the plains of Africa.

Returning closer to home, try to find a star whose distance in light years is the same as your age. When you look at it, the light you are seeing left that star the year you were born.

Parsecs
Light years are commonly used by amateur astronomers and popular writers, but professional astronomers prefer a different measurement of distance: the parsec. A parsec is equal to 3.26 light years.

Parallax
To measure the distance of a star, astronomers use the same method as surveyors on Earth - triangulation. Stars show a slight change in position when viewed from two widely separated locations, usually opposite sides of the Earth’s orbit. This change in position is known as a parallax, as shown in the header image. Using some geometry to determine the amount of parallax, we can work out the star’s distance - the closer the star, the greater the parallax.

Even the closest stars have parallaxes of only a tiny fraction of a degree. An object with a parallax of one second of arc (i.e. one 3600th of a degree) would be one parsec away, 3.2616 light years. In practice, no star is quite this close - Alpha Centauri has a parallax of 0.75 seconds of arc, which equates to 1.33 parsecs. Or, if you prefer, 4.3 light years.

The unsteadiness of the Earth’s atmosphere makes it difficult for ground-based observatories to measure reliable parallaxes for stars beyond about 100 light years. To overcome this problem, the European Space Agency launched a satellite called Hipparcos into orbit in 1989. Hipparcos produced accurate parallaxes for over 100,000 stars out to a thousand light years or more.

An even more ambitious follow-up mission, called Gaia, was launched in December 2013, and it is currently measuring the accurate distances of over a billion stars, one per cent of the Milky Way’s stellar population. The results are already improving our knowledge of the structure of the Galaxy around us.