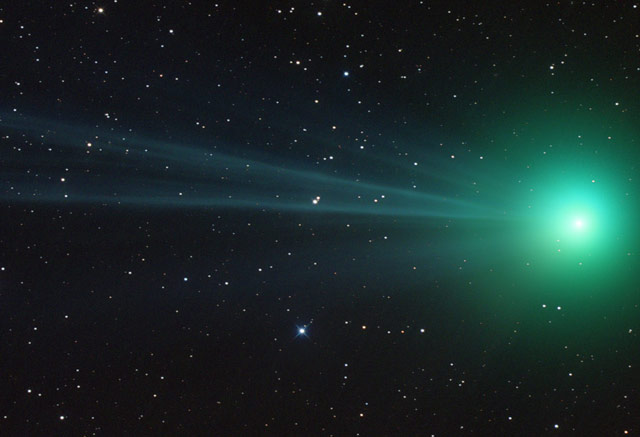 Saint Patrick's Day falls close to the northern spring equinox, and the shamrock is considered a symbol of rebirth. But the day isn't an astronomical holiday. It's what's thought to be the date of the saint's death. Saint Patrick's Day is a national holiday in Ireland, a celebration day for Irish people worldwide, and associated with the shamrock and the color green. I haven't yet seen any cosmic shamrocks, but there's plenty of green in the skies.

Aurorae
The Sun is where an aurora begins. It ejects charged particles that sometimes come in our direction. The particles can't bang straight into our atmosphere because Earth's magnetic field deflects them. But they may then get captured by the magnetic field itself. It channels them at high speed into rings high above the north and south magnetic poles. These two rings are called auroral ovals and it's why aurorae are mainly seen at high latitudes.

Normally, the electrons in atoms and molecules are pretty relaxed. Like many people, they prefer being in a low energy state. But they can get excited. One of the ways of exciting an electron is for another electron to collide with it and knock it into a higher energy state. This doesn't last for long, and as the electron relaxes again, it releases the excess energy as a photon (a particle of light). The color of the light depends on the amount of energy involved.

Green normally dominates an aurora, and the green light comes from excited oxygen atoms in the auroral zone of the upper atmosphere. That's at around 100-300 km (60-180 miles) up. Yet near the top of this zone, excited oxygen actually emits red photons. That's why photographs may show red at the top of an aurora.

Uranus
Uranus, the planet William Herschel discovered in 1781, is a blue-green color. [Image: NASA] The key to this is the presence of methane in its atmosphere. It's the third largest component after hydrogen and helium. When sunlight hits Uranus, the atmosphere absorbs some of it and reflects the rest back into space. Sunlight contains all the colors of the spectrum, but methane tends to absorb colors at the red end of the spectrum and reflect the ones at the blue-green end. And we only see the colors that are reflected.

Toxic Comets
Many comets appear green. Notable green comets from the past decade are 2009's Comet McNaught, Comet ISON in 2012, and Comet Lovejoy which is shown in the header image.

In the intense cold of the outer Solar System, comets are frozen solid. It's only as they get closer to the Sun that some of the ice turns to vapor, creating an extended atmosphere called a coma. It's likely to contain such ingredients as water, ammonia and methane, but may also contain cyanogen (CN)2 or a carbon gas known as diatomic carbon (C2).

Ultraviolet (UV) light from the Sun ionizes molecules in the coma, which means that it strips electrons away. Since the nucleus has a positive charge and the electrons have a negative charge, they soon get back together. When this happens photons are emitted. The color of a photon depends on the type of atom, and for either the cyanogen or the diatomic carbon, the color is green. In fact, if these substances are present, the green dominates the other colors.

Cyanogen gas – think cyanide! – is highly toxic. Fortunately, a comet's atmosphere is very diffuse, and they don't come all that close to Earth, so we're not in any danger at all of being poisoned. Nonetheless when Comet Halley was expected in 1910, fraudsters found a profitable number of customers for their gas masks and “comet pills”.

Nebulae
Nebulae come in all sorts of colors, including green. A lovely example is IC 1295, a green planetary nebula. A planetary nebula is made up of the gases cast off by a dying sunlike star. The green tint here comes from ionized oxygen. [Image: VLT]