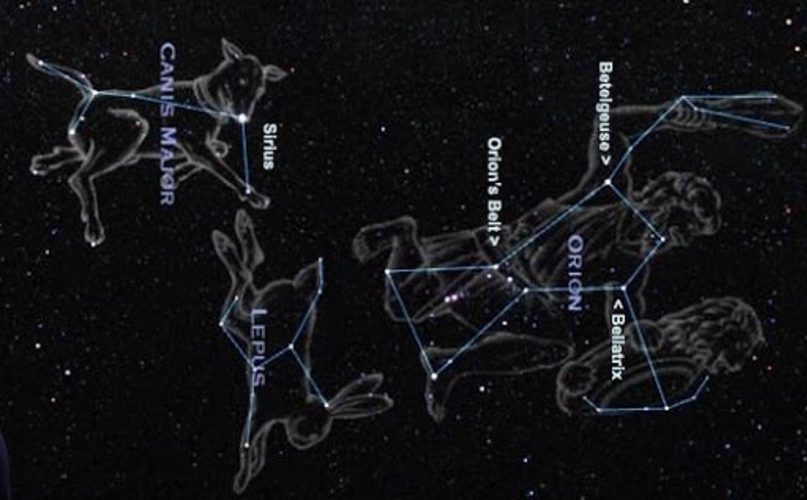 In a sky full of gods, heroes and wronged women, there are also four dogs. There's Canis Minor and the two dogs of Canes Venatici, but Canis Major [KAY.niss MAY.jur] is definitely top dog. It's a prominent constellation that has represented a dog from early Greek times.

History
Although Canis Major has many bright stars, Sirius reigns supreme. Bright Sirius has been part of the mythscape of worldwide cultures throughout time, long before it was part of a constellation.

Thousands of years ago in Mesopotamia Sirius was an arrow, and nearby stars formed the bow. Even though the Greeks adopted their astronomy from Mesopotamia, they saw Sirius as a dog, not an arrow. Over time it developed into a constellation that was simply the Dog.

When Ptolemy published the Almagest in the 2nd century, the dog (Kyon) was associated with a tiny constellation called Prokyon. Prokyon meant before the dog because it rose before Kyon. The Romans named the pair Canis Major (Greater Dog) and Canis Minor (Lesser Dog).

Mythology
Several myths are attached to Canis Major. It's commonly represented as one of the hunting dogs of Orion. However, there was a Roman myth in which it was the dog that failed to stop Zeus – who was disguised as a bull – from abducting Princess Europa.

In one of the Greek myths, Canis Major represented the dog Laelaps that always caught its prey. When the giant uncatchable Teumessian fox was terrorizing Thebes, Laelaps was sent to pursue it. The chase that ensued was almost too fast even for the gods to see, and a paradox ensued. What happens when the inescapable dog pursues uncatchable prey?

Zeus was usually more interested in attractive females than philosophy, and this paradox was giving him a headache. He resolved it in a straightforward way, ending the chase by turning both animals to stone. (We might wonder why Zeus didn't just zap the fox in the first place.)

Some sources say Zeus put the two animals in the sky as Canis Major and Canis Minor. However there's not much in the way evidence that Canis Minor was ever a fox.

Stars and planets
Sirius (Alpha Canis Majoris) is a binary star. Like Procyon, Sirius has a faint white dwarf companion called Sirius B. A white dwarf is the end product of the collapse of a sunlike star that's used up its nuclear fuel. Sirius A is about 25 times brighter than the Sun, and because it's so close to us, it appears as the brightest star in the night sky. Interestingly, although Sirius seems to us to be the brightest star of all, most of the other stars of Canis Major are actually much more luminous – but they're also much farther away.

Delta Canis Majoris – also called Wezen – is a yellow-white supergiant 1600 light years away. We see it as a second magnitude star, but in actuality it's 50,000 times brighter than the Sun. If it were where Sirius is, we'd see is as bright as a half Moon. And if it were to replace the Sun, it would nearly fill Earth's orbit.

One of the biggest known stars is VY Canis Majoris, a red hypergiant. It's located around 4000 light years from Earth. At that distance it's understandably difficult to work out its size and other characteristics. Estimates have differed wildly, varying from 600 to 3000 times the radius of the Sun. The best figure is probably that from observations with the Very Large Telescope (VLT). That gives a radius for VY Canis Majoris of 1420 (give or take 10%) solar radii, and a luminosity some 270,000 times that of the Sun.

As of June 2016, a total of ten planets have been found, distributed among seven Canis Major star systems. They include a super-Earth, a Hot Neptune, and a Saturn-mass planet. The others are Jupiter-sized or bigger. A Hot Neptune is a Neptune-sized planet close to its star – this one takes just four days to orbit.

Deep sky objects
The band of the Milky Way goes through the constellation and there are numerous deep sky objects. Here's a selection.

Messier 41 is an open star cluster about 2300 light years from us, the only Messier object in Canis Major. It's 25 light years across and contains about a hundred stars. Another open cluster, known as Caroline's Cluster, was discovered by Caroline Herschel in 1783. It's 15 light years in diameter and located about 3700 light years away. The cluster's age is estimated to be about 2.2 billion years. That's old for an open cluster, so the young bright blue-white stars are absent, having long since evolved past that stage.

Thor's Helmet NGC 2359 is an emission nebula 10,000 light years from Earth. [Image: Adam Block/Mount Lemmon SkyCenter/University of Arizona] The nickname comes from a resemblance to a cartoon Viking helmet. The nebula is formed around a large unstable star of a type known as a Wolf-Rayet star. It's 280,000 times brighter than the Sun and likely to explode as a supernova one day.

You Should Also Read:
Who Let the Dogs out?
ABC of Astronomy – D Is for Double Star
Death of a Massive Star