It’s six a.m. I’m up and the television is on. I don’t want to miss the newscast to see what tragedy has occurred somewhere in the world, having been out of touch during the hours I was asleep. News commentators can spin it for hours, telling the same headlines in ten different ways. When the television gets turned off, there is work to do, people to see. Making a living, making plans, occupies my mind. Life can be constant commotion from morning until deep into the night.

We’ve built a world that makes it easy to ignore our Creator. Building our own kingdom demands our time and energy. Electronic devices fill the air and our ears with noise, eliminating the need to contemplate on anything deep or soul searching.

Have you ever wanted to pull the plug? What would it take to turn off this world? Could I just yell “Silence!” and take time to listen to the peace God provides?


Psalm 19 begins “The heavens declare the glory of God.
And the sky above proclaims his handiwork.
Day to day pours out speech, and night to night reveals knowledge.” Psalm 19:1-2 ESV

God doesn’t need to make a sound to declare his glory. The voice of the heavens resounds in quiet evidence. Their silence fills the earth and holds our attention—if we let it. The world, most of us live in, drowns out the great commentary of who God is. 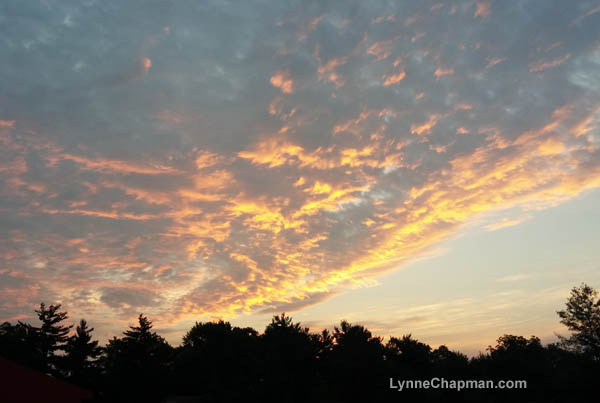 Sunrise is a myriad of color. The sun continues its course, warming, nourishing, or burning all in its path. Spectacular sunsets display God’s majesty. These get our attention, at least for a while.

A day this week, when I went to social media to post my photo of the vivid rainbow that had graced the sky, I found many identical images, proving how many people were held in rapt attention, peering at the same sky at the same time. After the rainbow, came a golden sunset, and more social media postings—all marveling at beauty only God could produce. A short break in the chaos.

Turn off the television, the radio, the noise. Silence the phone. Tell family and friends it’s quiet time. Marvel at the beauty and magnificence of the world God created. Listen to God’s silent Scripture. Feel the refreshing of your soul.

Genesis 1:6-8 - “In the beginning, God created the heavens and the earth” His Spirit hovered over the waters. He created light, distinguishing day from night.

Genesis 9:13 - God set his rainbow in the clouds as a sign of a covenant with his people.

You Should Also Read:
Jehovah Shalom - The Lord our Peace
Elohim - Our Creator
Jehovah-Rohi The Shepherd