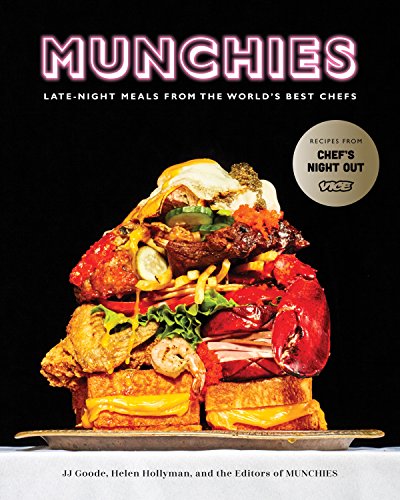 Is there anyone out there who doesn’t crave munchies late at night? And who isn’t interested to learn what famous chefs prepare late at night when their cravings appear? MUNCHIES: Late-Night Meals from the World's Best Chefs is a delightful cookbook filled with mouthwatering dishes that are perfect for serving late at night. They have all been featured on the popular television show, Chef’s Night Out. Of course chefs who cook during the day are most likely not up to going home and cooking more, so these dishes are quite easy and less involved than what would be expected from a famous chef.

One chef, Dominique Crenn, who has been awarded two Michelin stars, eats grilled cheese after hours, and gives perfect instructions for making these comforting sandwiches at home. Alisa Reynolds, Chef at My Two Cents, takes the grilled cheese to an ethereal realm with her delicious Fried Shrimp and Bacon Grilled Cheese. There are several Asian recipes for favorites such as Pad Thai, Chinese Drunken Noodles, and Fried Chicken Fried Rice. Some of the recipes require a bit of prep work and some of the components are made ahead, but nothing in the cookbook is too involved or time-consuming. There is an excellent recipe for Poutine, which is a calorie-laden dish of French fries with cheese curds and gravy, and an incredibly delicious Tuscan Fried Chicken from Robert Bohr of Charlie Bird. Those with a sweet tooth won’t be disappointed with the sweet offerings such as Blackout Stout Cake and Toasted Coconut Lemon Curd tart. Yum!

An important note: All of the recipes turn out exactly like they are supposed to, and end up picture perfect. The instructions are organized and succinct. Anybody can actually prepare these dishes – no culinary school degree needed, and the photographs let home cooks know just how each dish should look when finished.

All told, MUNCHIES: Late-Night Meals from the World's Best Chefs is a fun cookbook for anyone who gets cravings late at night or happens to have hungry friends hanging around.