Tiger Woods PGA Tour 07 for the PS3 really helps to show how far golf games have come. The motions are fluid, the characters realistic, and the gameplay is fun. 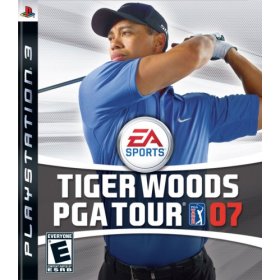 First, the gameplay. That's always what matters most in a sports game. We've been playing a lot of Wii sports games and are really impressed with being able to swing the controller like a golf club, which is very "natural". That being said, they did a great job here with what they had available.

Rather than using a "power bar" like some golf games, you simply watch the golfer on the screen, and judge by his actual swing. This means you have to have some knowledge about the real game of golf, to know how much a golfer *should* swing. However, it also means that this doesn't turn into an arcadey button-pushing exercise. You're actually paying attention to the swing and proper form.

On the other hand, once the ball goes up into the air, you can press buttons to affect its flight - including once it lands. I find this a little cheap myself, as if you have a remote control and are moving the ball around. I realize that it'd be a lot to ask a player to do, to control the swing speed, angle, backspin, etc. while they are swinging - but again that would be realistic. So with one hand they giveth, and with the other they taketh away.

There are the standard styles of gameplay here - match play, best ball, as well as a range of fun mini-games. I really like how they handled the tutorials, allowing you to jump in and out of them as you need to. They even let you read them, watch them, or just try them, based on your individual style.

There are different levels of difficulty, so you can let your kid play in easy mode to learn the game, while the experienced golfers can tune their gameplay with a more difficult challenge.

The graphics are rather impressive for a just-after-launch title for a new console. You don't expect those releases to be able to fully utilize what the PS3 offers, but they did well here. Tiger Woods himself looks very realistic and impressive; his movements are quite smooth. You can see individual blades of grass on the greens. The water is a little odd, and the trees are a little pixelly, but I'm sure when '08 comes out they'll nail some of those smaller details.

The key thing with golf is mainly that you can see the fairway, and then read the greens. You don't really pay attention to the details on the audience's faces. I do like how they handle the greens in this game vs in other golf games. The combinations of grids, lines and colors give you a good sense of each area of the green. There are even nice details like shadows of clouds drifting by and reflections in objects.

Does anybody really listen to sound in a golf game? You get the roaring of the ocean, the chirping of birds, and the inane chatter of the commentary folks. Some of their statements made me laugh out loud. You can choose various songs if you're playing with a soundtrack.

If you're a golfer with a PS3, this is definitely the game to get. If you've got other systems, it'll depend if you like the motion-sensing capabilities of the Wii enough to offset the lower graphics on that system ... or the motion-twisting PS3 controller vs the 360.

You Should Also Read:
Tiger Woods 2006