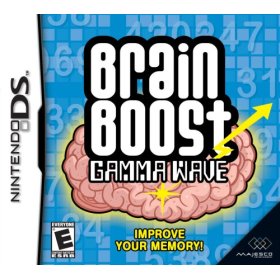 Still, I'm a sucker for brain boosting games. I play and enjoy Brain Age, Big Brain Academy, and several others. Studies have certainly shown that your brain is a "use it or lose it" part of your body.

So just how does this game help with your concentration? First, the plot. It involves scientist, robots, and silliness. I really don't see why any brain game should have a plot. The other Brain Age style games don't bother. To have to page through screens here to get to the actual game is a bit silly. Hopefully their future releases will dispense with those meaningless screens you have to page past.

So, the actual game itself. There are five minigames. These are:

Find a Match - they show you a grid of images, and you click on the two that match.

Shape Recognition - they show you a tetris-like image, and you have to choose which of the four images shown match it.

Addition - they show you a bunch of numbers, and you have to sum them up.

Remember Sequence - they show you a series of images, and then you have to click on which one was the "3rd shown" or "5th shown" or whatever they choose.

Moving Dots - I actually like this one. They put a random number of dots on the screen, in motion. You have to count them up while they're moving and click on the total.

I really have to question how some of these have anything to do with concentration. Adding up numbers isn't a matter of concentration. It's a matter of math skill. Finding a match would seem more like memory to me. I suppose since they titled the other brain game "memory" they had to name this *something* to convince you to buy both of them, but I'm just not seeing the concentration angle.

There isn't any charting of your progress. You have no idea if you did better yesterday than you did today. In the training area, you just max each level out to 100% and then it's done. You're only doing 20 of each puzzle so it's not THAT hard.

Maybe I'm spoiled by Brain Age and Big Brain Academy. Those games test your brain, but they are really *fun*, they track your progress, they make you want to come back and play again tomorrow. They show you how well you're doing. With this game, it feels like homework, and you don't even get a sense of accomplishment or progress.

A nice idea, but poor implementation.