The age of Romanticism is classified as the end of the 18th century into the 19th century. During this time, Romanticism had a profound impact on the development of western jewelry. Changing social conditions and the onset of the industrial revolution also lead to growth of a middle class that wanted and could afford jewelry. As a result, the use of industrial processes, cheaper alloys, and stone substitutes, lead to the development of paste or costume jewelry.

This period also saw the first major collaboration between East and West; collaboration in Pforzheim between German and Japanese artists lead to Shakudo plaques set into Filigree frames being created by the Stoeffler firm in 1885. Perhaps the grand finale – and an appropriate transition to the following period – was the masterful creations of the Russian artist Peter Carl Faberge, working for the Imperial Russian court, whose Faberge eggs and jewelry pieces are still considered as the epitome of the goldsmith’s art of Guilloche.

A category unique to this period and quite appropriate to the philosophy of romanticism was mourning jewelry. It originated in England, where Queen Victoria was often seen wearing jet jewelry after the death of Prince Albert; and allowed the wearer to continue wearing jewelry while expressing a state of mourning at the death of a loved one. 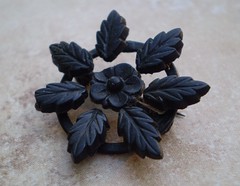 I have this one piece of jet mourning jewelry, a small brooch.

During this time of Romanticism, a significant influence was the public’s fascination with the treasures being discovered through the birth of modern archaeology, and the fascination with Medieval and Renaissance art. Distinguished goldsmiths continued to flourish, however, as wealthier patrons sought to ensure that what they wore still stood apart from the jewelry of the masses, not only through use of precious metals and stones but also though superior artistic and technical work.

In the United States, this period saw the founding in 1837 of Tiffany & Co. by Charles Lewis Tiffany. Tiffany's put the United States on the world map in terms of jewelry, and gained fame creating dazzling commissions for people such as the wife of Abraham Lincoln; later it would gain popular notoriety as the setting of the film Breakfast at Tiffany's. In France, Pierre Cartier founded Cartier SA in 1847, while 1884 saw the founding of Bulgari in Italy.

Please remember to sign up below for Bella Gems weekly newsletter....Don't miss a thing!!