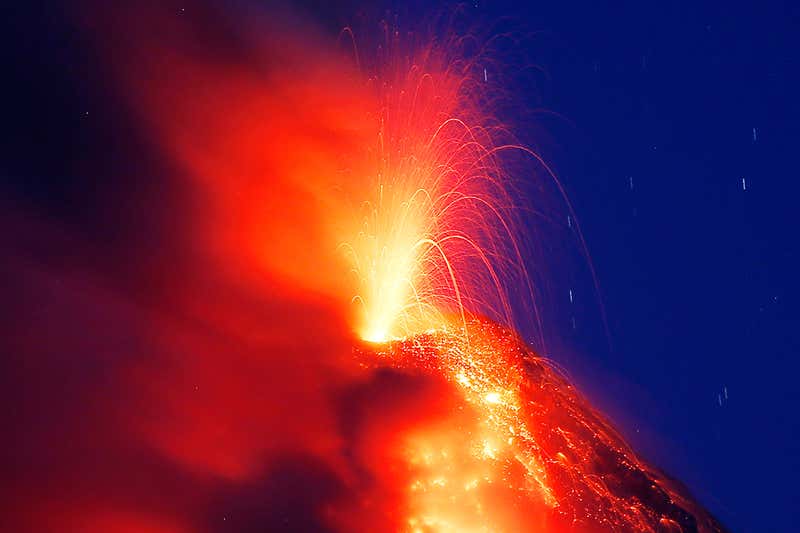 A volcanic eruption is a magnificent, but terrifying, sight. A weakness in the Earth's crust forms a channel for molten rock from the interior to spew it out onto the surface.

Earth's crust is broken into large pieces called plates and they are moving in slow motion. Where two plates are pushing together or pulling apart, the stresses on the crust lead to volcanic activity. You can see from this map that most volcanoes are on the edges of plates. But the map also shows a prominent exception: the Hawaiian Islands.

Geologists think the Hawaiian Islands were created by the movement of the Pacific Plate over a "hot spot" where magma wells up through the crust and then solidifies. This produces volcanoes called shield volcanoes. The largest volcano on Earth, Mauna Loa, is a shield volcano. It rises to over 4000 meters (13,000 ft) above sea level and also goes down another 13 km (8 miles). That's big, but not compared to the biggest volcano in the Solar System, Olympus Mons on Mars.

Olympus Mons, which is also a shield volcano, is almost 22 km (14 miles) high, nearly three times the height of Mt Everest. Its volume is about 100 times greater that of Mauna Loa. In this picture an image taken from orbit is used to compare Olympus Mons to the state of Arizona.

A number of Martian volcanoes are larger than Mauna Loa. Since there are no moving crustal plates on Mars, when the magma from a hot spot came through the crust, all of it went to forming one volcano, not a chain of them. The lower gravity of Mars also helps, as such a volume of material in Earth's gravity would simply collapse long before it got to the size of Olympus Mons.

The volcanoes on Mars are extinct, but we aren't so sure about Venus. Basalt is a rock formed from cooled magma, and 90% of the surface of Venus is basalt. There are also several shield volcanoes on Venus which are larger than Mauna Loa. The largest of all is Maat Mons, named for Ma'at the ancient Egyptian goddess of truth and justice. (Almost all of the features on Venus are named for women and goddesses.)

Some observations of Venus have had astronomers thinking that there could be current volcanic activity on Venus, but we can't really tell because of its thick clouds. The Magellan probe was able to map Venus from orbit only by using radar which can penetrate the clouds.

There is no doubt about volcanic eruptions on Jupiter's moon Io. Its volcanic activity was first spotted in 1979 Voyager images, and it's the most volcanically active body in the Solar System.

Our own Moon was once active, which is obvious from such features as its maria, but it hasn't been active for a very long time. Yet Io is about the same size as the Moon and about the same distance from Jupiter as the Moon is from Earth. How does Io have over 400 volcanoes and an orbit taking 42 hours instead of 28 days? It's due to the mass of the parent planet. Jupiter has over three hundred times the mass of Earth, and the tidal interactions between it and Io are strong, generating considerable internal heat in the moon and stresses in its crust.

Although we associate volcanoes with heat, probes have discovered evidence of volcanic activity on the icy moons of the outer planets. It's called cryovolcanism and instead of molten rock, water or other liquid is ejected. The first cryovolcano (ice volcano) was discovered by Voyager 2 on Neptune's moon Triton in 1989, but more recently, Cassini-Huygens has found them in the Saturnian system.

A cryovolcano ejecting methane on Saturn's largest moon Titan may well be an important source of methane in Titan's thick atmosphere. However one cryovolcano on Enceladus was mostly water vapor, though with small amounts of nitrogen, methane and carbon dioxide. We know the composition of the volcanic plume because the Cassini spacecraft flew through it in 2009. Here is a Cassini photograph of ice jets on Enceladus.

There are probably other active volcanoes on other moons of the giant planets and possibly on Kuiper Belt bodies such as Quaoar. Vulcanism is a very useful way of learning more about the structure of heavenly bodies.