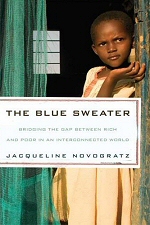 In 1987, Jacqueline left her job at Chase Manhattan Bank to go to Africa with a nonprofit women's organization. After a disasterous two months in the Ivory Coast, Jacqueline ended up in Rwanda and eventually helped to start Duterimbere, a small micro-finance organization that makes loans to poor women who want to expand their small businesses. This grassroots non-profit organization was so successful it survived the Rwandan geonocide in the mid-1990s and now makes many loans to low income women and offers savings accounts to the general population.

Jacqueline started the Acumen Fund based on her experiences in Rwanda. The Acumen Fund provides financial and other support to grassroots solutions to providing better agriculutral, communications, housing, medical, and clean water solutions to the developing world.

I found this book truly inspirational. Jacqueline shows why traditional charity such as donations and woman's crafting cooperatives do close to nothing to improve the lives of the poor. At times this type of charity can leave the people involved poorer than when they began. Jacqueline illustrated through her learning and examples how providing loans to emerging businesses can lift people out of poverty and create small business that are viable and provide sustainable work to many people.

If you are interested in charity work around the world, or donate to various charities, I highly recommend you read "The Blue Sweater" to find out more how charities work and how to make the most of your donations.

Jacqueline Novogratz's book The Blue Sweater is available on Amazon.com.

A review copy of The Blue Sweater was provided by the publisher free of charge.