Amlou is an almond, argan oil, and honey spread generally used as a spread or dip for breads and crackers. Amlou can also be used as a filling for crepes. It is also known as amalou or argan spread.

Berber tribes in Morocco make amlou as a chunky paste - not grinding the almonds finely. Amlou is difficult to buy outside of Morocco, although an African grocery store may carry it. Making amlou is rather easy and you can grind the almonds to the texture you prefer.

At one time amlou was traditionally kept in the bedroom of those who could afford it as it was considered an aphrodisiac. It was also given as a typical wedding gift for the new couple.

1. Place almonds and argan oil into a food processor, blender, or mortar and pestle.

2. Grind almonds and argan oil to the texture you prefer. You may need to add more argan oil depending on the texture and consistency you like.

3. Add in honey if desired one tablespoon at a time stirring well.


Store amlou in a sealed container at room temperature. 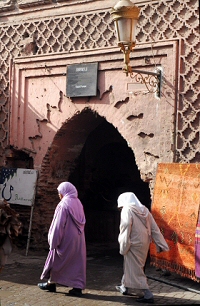 *You may use peanuts instead of almonds for this recipe.


The Berber people inhabit Morocco, Algeria, Tunisia, Libya, Egypt, Mauritania, Mali, and Niger. Berbers have intermixed with various ethnic groups and are identified by their language instead of a racial basis. The Berber language has over 300 distinct dialects. Written Berber is not often taught and rarely used.

Berbers are traditionally Muslim and are in a constant power struggle with the Arabs in Northern Africa. They generally live in rural areas raising cattle and sheep. They also work in flourmills, doing woodcarving, quarrying millstones, and making pottery or jewelry. The women generally do housework, weaving, or pottery. Their homes are usually clay huts or tents made from goat hair.