Rote Grütze is delicious, despite its unglamorous translation - Red Grits. "Red" for the summer fruits and "Grits" the thickening ingredients "grits/groats", used instead of today's potato or corn starch.

Originally "Hausmannskost", simple home cooking, now it's a summer berry "fruit salad with a difference", and summer favorite in Germany.

Not only in homes but at the trendiest restaurants and bistros.

Summer's seasonal berries, from red currants, raspberries and cherries to blackberries or blackcurrants for contrast, (although strawberries don't work), make Rote Grütze one of those easy recipes that is light, delicious and also just that little bit different.

Often made as a seasonal dessert it can just as easily be a light summer supper, a snack, even breakfast. Although for breakfast it will definitely be one without the optional alcohol.

The original classic version used only red currants and raspberries, but now almost any soft fruit is added. Although strawberries make a lovely decoration too many, or even any, in the mix can be a disappointment as the preparation with its use of heat makes them mushy, so they lose not only their looks but also their taste.

There must be as many German recipes as there are families who make Rote Grütze , and they range from simple and quick, bringing fruit to the boil with a cup of water and sugar to taste for a few minutes then thickening with potato or corn starch, to recipes like this traditional recipe given to me by my late mother-in-law. It was based on one used by her family in what used to be East Prussia, where there was an abundance of heavily laden berry bushes during the summer months. 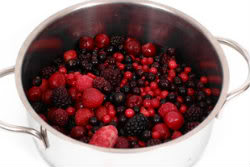 Strain over a large bowl through sieve lined with cheesecloth, being careful not to crush fruit

Make up to three cups of liquid with red grape juice, or you can also substitute some of the quantity with red wine and/or Kirschwasser

Bring to the boil over medium heat

Dissolve potato or cornstarch in cold water and add to hot liquid in pan, stir constantly until thickened

Sweeten sauce to taste and continue stirring until sugar has dissolved

Pour the thickened juice over the fruit in the bowl

Refrigerate for at least five hours, overnight if possible, and until about half an hour before it is needed

Pour into individual bowls or glasses before serving, or prepare sometime beforehand, return them to the refrigerator and bring out shortly before they are to be served

In Germany the traditional topping is a thin Vanilla Sauce, but heavy/thin cream or ice cream are also popular. Often a sprig of a green herb such as lemon balm is added as a contrast.

Rote Grütze can be used as a topping for pancakes, waffles, cheesecakes, yoghurt, quark, ice cream, and even cottage cheese.

Combined with heavy cream it's a filling and/or "frosting" for richly decadent cakes, a delicious topping when poured over a cream filled meringue, or it can be enjoyed just as it is.


And there are alternatives in the "GRÜTZE" family: Grüner (Green) Grütze made from gooseberries in combination with greengages, seeded green grapes, kiwi, apple or pineapple, and as a liquid green grape juice, white or rose wine and/or Kirschwasser or some other fruit brandy.

Gelbe (Yellow) Grütze from peaches, yellow gooseberries, pineapple, bananas, yellow plums or any other yellow fruits, and white/green grape juice or apple juice, and for that extra "kick" white or rose wine and/or Kirschwasser or another flavor of fruit brandy.

Although it began as a seasonal recipe with summer berry bushes providing all the raw ingredients, you can easily use frozen fruits when fresh are not available, just thaw them thoroughly and use any resulting liquid in the preparation.

This will be a little different in taste and texture but still good to eat, not only making a refreshing end to heavy winter meals but bringing back the color and memories of summer.