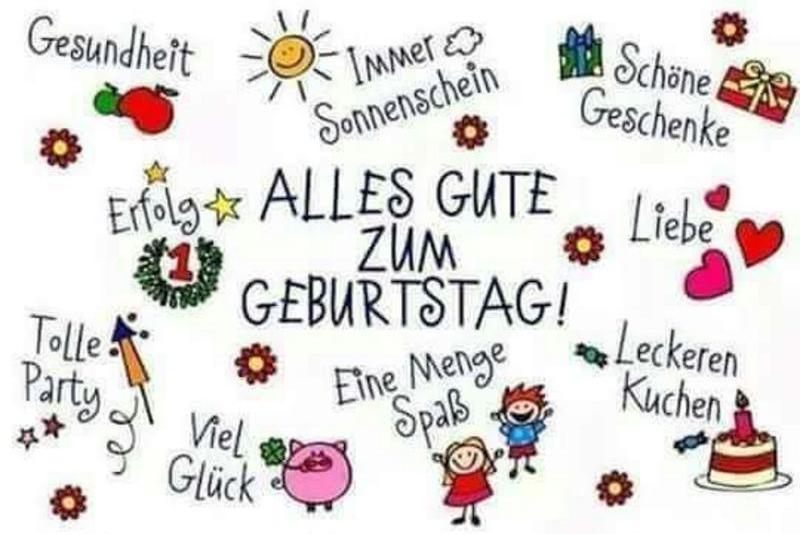 Never under any circumstances give the Geburtstagkind, (A 'Birthday Child' no matter how old), his or her greeting even a minute before "THE" day has arrived.

Not even if you know you will not see them on the actual day, giving wishes beforehand is an absolute taboo. The tradition is

that this will bring bad luck for the following year...and who needs that thought when they blow out their candles on the day.

Celebrate "into" a person’s birthday at midnight, joy and happiness all around...seconds before, startled silence at best, horror struck faces at worst.

Just one of the important rules you have to know when birthdays are being celebrated in Germany.

No birthday presents are opened before the day, and even if you are not German still don’t open them if you want to avoid bringing "angst" either into the lives of the givers, or any Germans who might share your life in any way. From those in the office to the home.

Birthday candles are popular tradition. A candle for every year and an additional one for good luck. Some are designed to last all day, put onto the birthday cake if there is one, or on a safe surface, and left to burn as long as possible.

Of course this does mean that if the Geburtstagkind is 90 the cake, or table, had better be very large indeed, and it might be a good idea to have a fire extinguisher handy, while the heating can be turned down even in the depths of winter.

German children love birthdays, which is not surprising because not only is the house decorated in their honor it is a day free from homework, or any of the tasks that they would normally have to do.

And there is a special tradition, a wooden birthday wreath with twelve holes or holders for candles and in the middle enough room for the "Light of Life" candle, a large decorated candle which is lit each year, or a "Number" candle.

For each year of a child's life until it reaches twelve a candle is placed in the wreath and lit, until all twelve candles and the "life" candle,

or "age" candle burn together. A milestone.

And for all age groups one of the most popular "Geburtstag" songs from Kindergarten onward is '"Wie schoen dass du geboren bist", How wonderful that you were born.


Although once adulthood takes over celebrating a birthday becomes a little more complicated in Germany.

If it is your birthday that means you have to organize and pay for it yourself, which means a choice has to be made. You prefer the passage of time to pass quietly, preferably unnoticed, and by doing so perhaps save enough to have a holiday? Then don’t organize anything.

But if a birthday cannot possibly pass without some type of celebration, then some weeks before it is time to start drawing up lists and menus, as well as raiding the Sparschweinchen, piggy bank.

From a meal in a restaurant, where once again not only all the organization but also the bills are covered by the birthday boy or girl, to the office when coffee, or something stronger, and cakes will be expected at the very least.

Having a birthday during a holiday does not mean that this is a convenient escape route, and that work colleagues will then happily settle for looking forward to celebrating next year.

No the first day back at work means you arrive rested or exhausted, depending on the holiday, perhaps tanned, but certainly carrying cake boxes.

For birthday greetings in Germany "Alles, alles Gute zum Geburtstag" is still probably the favorite phrase used, "Everything, everything good for your Birthday", but the English "Happy Birthday" is not far behind these days. And there is a more formal "Ich gratuliere zum Geburtstag" - "Congratulations on your birthday".

And why congratulations, it isn't an exam that has been passed after all. Well the usual reply is, "Consider the alternative, so far you are still around".

The "Round Birthdays" are often big occasions, 30, 50, 80. While in some regions "Der Abrahamstag", the 50th birthday, is special for men, and loosely based on some words from John 8.57 in the bible. And the German interpretation is: When a man turns fifty, he sees Abraham, and "at that age he must have the same wisdom of life and dignity as Abraham".

In other areas any man reaching thirty, (dreissig), and

currently without a girlfriend is made to sweep stairs.

His friends will make sure the stairs are in an easily seen open area and in such a mess that they will need a lot of work, so take up as much time as possible, then any young woman who passes by can see that here is an available 30 year old male who can also keep house.

After all he is no longer a "Junger Huepfer", spring chicken, so it is all "uphill" after the 30th birthday.

Germany remains a family orientated country and one way or another family will be included in any birthday celebrations, regardless of age and distance, if it is not on the day itself then as soon as possible afterwards. These really are family events where "outsiders" are rarely invited, and one of the most popular customs is composing poems in honor of the birthday celebrant.

Some memories fade but others are unforgettable and, especially if they are as embarrassing as possible, these are often what make up the bulk of the poems.

So, although a birthday party where non-family members are excluded might seem a little strange at first, it is perhaps a relief to many a Geburtstagkind that all these memories won't end up reaching a new and wider audience outside the family.

In some cases that might even be the best birthday present of all.