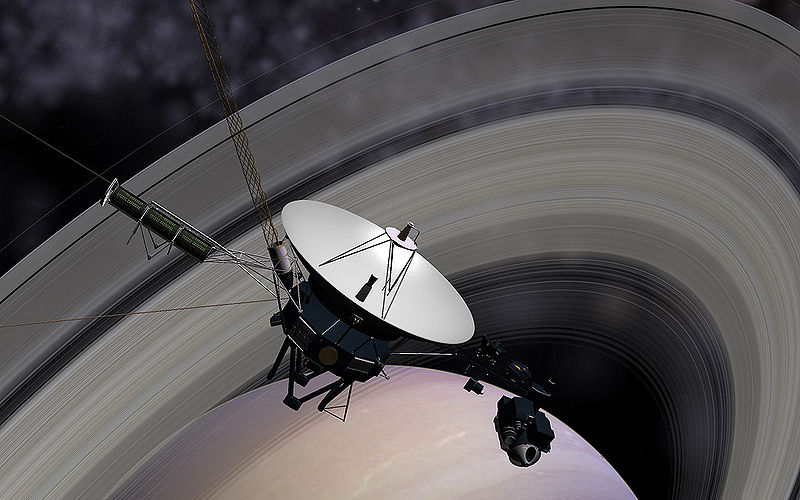 A spacecraft left Earth in August 1977 to begin the most spectacular journey ever made. Voyager 2 visited all four of the giant planets, using the gravity of each one to accelerate it towards the next one.

There are links at the bottom of this article if you want to know more how the Grand Tour came about, and the journey of Voyager 2's twin.

Jupiter and Saturn
Within two years of leaving Earth, Voyager was observing Jupiter and its moons. Voyager 1 had already passed that way, and discovered two new moons, found evidence of live volcanoes on the moon Io, and discovered that a network of lines criss-crossed Europa, seemingly giant cracks in the surface. What next?

Voyager 2 discovered new rings around Jupiter, and another new moon. Its data confirmed that Io was, in fact, the first active volcanic body found beyond Earth. Between them the two Voyagers observed nine eruptions on Io. However, in contrast to the violence of Io, Voyager 2's higher resolution images of Europa showed that the surface wasn't cracked. It was flat and smooth, and made of water ice. It also seemed that beneath the ice was a liquid ocean.

The probe studied Jupiter's atmosphere, and showed that the Great Red Spot, which is visible in earthly telescopes, was an enormous anticyclone.

A kick from Jupiter's gravity got Voyager to the Saturnian system in under two years. Voyager 1 had already visited, ending its planetary mission with a fly-by of Titan, Saturn's intriguing largest moon.

Voyager 2 discovered three new moons, and had a good look at over a dozen other moons. It also made measurements of Saturn's atmosphere, including penetrating the planet's upper atmosphere with a radio beam to get temperature and density measurements.

But the best was yet to come. NASA decided to go ahead and send Voyager 2 on to Uranus and Neptune. It was the first – and only – spacecraft to visit them. Much of what we know about these distant bodies is due to Voyager.

Uranus
Even with a boost from Saturn, it took as long to get to Uranus as it had taken to get from Earth to Saturn.

Uranus is a very peculiar planet. Astronomers already knew that its axis is tilted so much that it's orbiting on its side. With its year of 84 Earth years, Uranus has seasons 21 years long.

Voyager discovered that Uranus has a magnetic field, but one unlike those of other planets. For example, Earth's own magnetic field is fairly closely lined up with the rotational axis. This is why a compass is helpful, but doesn't quite point true north. On Uranus, the two axes aren't even close, the magnetic axis being sixty degrees off the rotational one. Voyager later found that Neptune also had a strange magnetic field. Planetary scientists are still trying to work it out.

But there was something much stranger than the magnetic field. One pole of Uranus is in sunlight for half the Uranian year while the other remains in darkness. Yet the temperature was much the same throughout the cloud tops. There is still no convincing model for heat circulation on Uranus. (Time to go back maybe?)

Uranus - and also Neptune - turned out not to be just smaller versions of Jupiter and Saturn. Their composition is different and includes a number of ices (e.g., frozen water, ammonia and methane). Therefore they are often described as ice giants rather than gas giants.

Voyager discovered two new Uranian rings and ten new moons. It also discovered that the moon Miranda was a strange jumble of younger and older surfaces, with deep faulting. Some scientists suggested that it had once broken apart and then come back together again.

Neptune
Even with a push from Uranus's gravitational field, Voyager was three and a half years getting to the Neptunian system.

There was already evidence that Neptune had some kind of rings, though astronomers couldn't see complete rings. Voyager was able to confirm that Neptune has a ring system.

Voyager found a Great Dark Spot which was assumed to be an anticyclone like Jupiter's red spot. The dark spot disappeared sometime after Voyager's visit, and some scientists suggest that it wasn't a storm, but a hole in Neptune's cloud deck. Neptune has some spectacular weather. It's one of the windiest places in the Solar System with wind speeds measured of up to 2000 kilometers per hour (1200 mph).

One of the most important findings was a precise measurement of Neptune's mass.

By the end of the 19th century it seemed that Neptune's orbit was disturbed. Was a massive Planet X affecting Neptune like Neptune's gravity affected Uranus? Tombaugh discovered Pluto while searching for Planet X, but Pluto is tiny, so the puzzle remained. The Voyager value for Neptune's mass cracked it. It turned out that there is no puzzle, the orbit is as it should be.

Voyager had one final task to complete the planetary mission. That was a fly-by of the moon Triton. The moon has a young surface. Even the oldest parts were about 50 million years old. (That is young in geological terms.) But it also has an active surface with erupting nitrogen geysers. Measurements showed that Triton is denser than the moons of the other outer planets. Since it also orbits in the opposite direction to Neptune's rotation (retrograde), it's probably a captured body, most likely a Kuiper Belt object.

The Triton fly-by was on October 2, 1989. Then Voyager 2 officially followed the example of her twin and headed into the Kuiper Belt to begin its part of the Voyager Interstellar Mission. On December 10, 2018, it was announced that the spacecraft had entered interstellar space on November 5th.


You Should Also Read:
Voyagers – Preparing for the Grand Tour
Voyager 1 - Gas Giants and a Last Look Homeward
Voyagers - the Golden Record