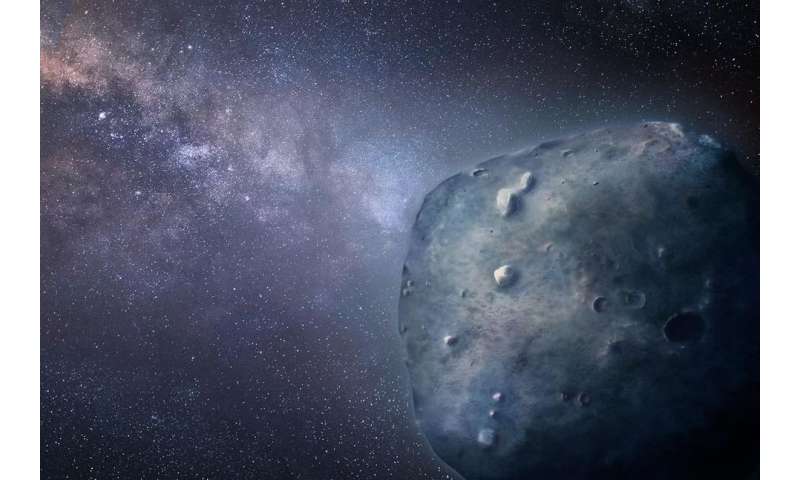 Meteors
There are lots of potential meteors in space. They're bits of rock and dust, many of them as small as a grain of sand, but also much larger ones. They may have been thrown out in collisions, or perhaps are some of the rubble left over from the formation of the Solar System.

As the Earth goes around the Sun, some of this detritus enters our atmosphere. We call these bits meteors. You don't actually see the original object itself. It hits the atmosphere at high speed, is heated by friction and leaves behind a trail of glowing gas as its particles interact with the air molecules. Most meteors burn up, but if one is big enough for part of it to reach the ground, it's called a meteorite.

Meteor showers
A random meteor is described as sporadic, but others are part of a meteor shower. There are a number of annual meteor showers, and each is usually associated with the debris stream left behind by a particular comet. As Earth travels around the Sun it passes through the debris. The Eta Aquarid shower, for example, occurs from about April 21 to May 20 and is made up of material left behind by Halley's comet.

Besides the sporadics, there are also some minor meteor showers active in December. If you see a meteor and wonder if it's a Geminid, mentally trace the path of the meteor backwards to see if it takes you back towards Castor.

The meteors in a shower don't fall like rain, even at the peak of their activity. Very occasionally there have been fabulous meteor showers with the meteors appearing several each minute, but this is rare. Yet in a clear dark sky at the peak of some showers the rate can be very high.

The Geminids
Many of the meteor showers have been known for a long time. There are records of the Perseids, for example, going back over two thousand years. The Geminids are much more recent, being first reported in 1862. Their activity has been gradually increasing over the decades with the current peak often given as 50-80 per hour. However in good viewing conditions, activity of recent showers has been twice that.

The first meteor shower to be connected to a specific comet was the Perseids. In the late nineteenth century Italian astronomer Giovanni Schiaparelli (1835-1910) was able to link it to comet Swift-Tuttle. Astronomers have since identified the parent bodies of the other main meteor showers. Despite that the origin of the Geminids remained a mystery for over 120 years.

The Geminid shower is known for its bright and colorful meteors. In addition to the expected white, they can be green, blue, yellow and even red. The shower also produces a number of fireballs, exceptionally bright meteors.

3200 Phaeton
Nearly a century of searching failed to find a comet which could be responsible for the Geminids. The mystery was finally solved in an unexpected way. In 1983 Simon Green and John Davies discovered an asteroid in data from the Infrared Astronomical Satellite (IRAS). When its orbit was confirmed, the Minor Planet Center of the International Astronomical Union listed it as 3200 Phaeton. The study of its orbit showed that it was a good match for the Geminid debris stream. This was the first time a meteor shower had been linked to an asteroid.

The header image is an artist's impression of 3200 Phaeton. [Credit: Teddy Kareta]

Seeing the Geminids
The Geminids are visible from about December 7 through December 18, usually peaking on the night of December 13/14. They're best seen in the northern hemisphere, but can also be seen in the southern hemisphere. For the best chance of seeing a good show, it's worth consulting a website, newspaper or astronomical society about dates and times in your region. Otherwise just have look at the sky whenever you can manage it.

Here are a few recommendations to get you started:

1. Find a dark place.
2. Be patient – your eyes take about ten minutes to adapt to the dark.
3. No bright lights (including phones) or your eyes need to readapt. Red light is okay. Taping red cellophane or clear red plastic over an ordinary flashlight will let you see without affecting your adaptation.
4. Avoid neck strain by using a reclining lawn chair or camping mattress.
5. Wear warm clothing, take a blanket and a hot drink.

In general, take all the normal precautions for being outside in the dark and cold. Stay safe. Stay warm. And enjoy the night sky.

You Should Also Read:
Perseids – Meteor Shower
Gemini – the Celestial Twins
Meteor or Meteorite and Other Posers