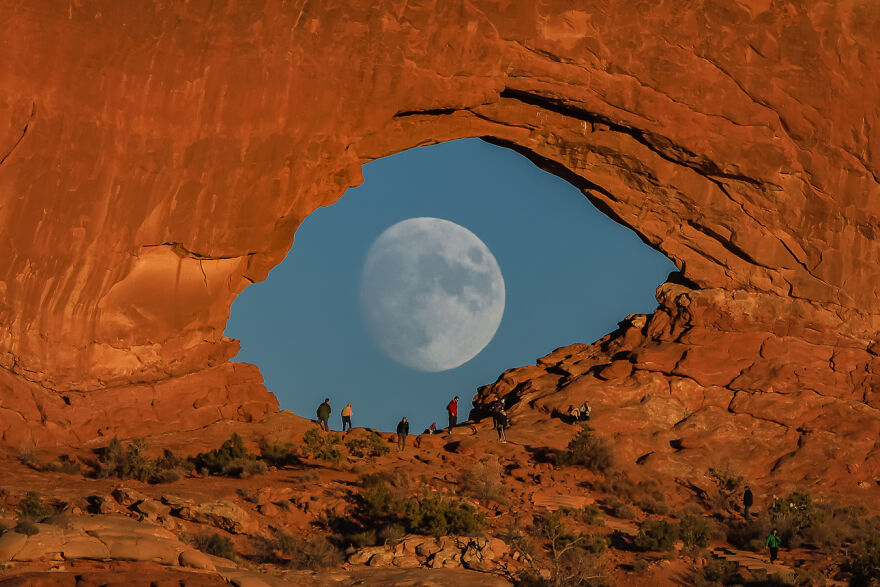 ”The Eye of the Moon,” photographed in Arches National Park by Zach Cooley

Christmas 2021 is past now, but you can still enjoy the daily astro advent images posted in the Bella Online Astronomy Forum. The final days of the countdown included images of a prize-winning aurora, a nebula that looks like a dolphin head and the Moon looking like an eyeball.

There are only a few picture links in this article, but there is a link to the forum thread at the end.

17 The header image is one of the clever and imaginative photos taken by Zach Cooley. “The Eye of the Moon” was taken at Arches National Park in Utah, USA. He worked out when he'd be able to capture the Moon centered in one of the arches to make it look like an eye. It's a single exposure, not photoshopped. You can see more of Zach's photos on Instagram at zachcooley.smugmug.com.

18 An image taken of the Jökulsárlón Glacier lagoon in Iceland with the Vatnajökull Glacier in the background won the Greenwich Observatory Astronomy Photographer of the Year competition in 2014. One of the judges said of James Woodend's photo, “This beautiful image captures what it's really like to see a good aurora – the landscape, with the reflections which seem almost sharper than the shapes in the sky, is a terrific bonus, too!”

19 A single astrophoto rarely tells the whole story. Courtesy of NASA/JPL-Caltech, Astronomy magazine provided four photos of the two merging galaxies of the Whirlpool galaxy. Each picture was taken at a different wavelength of light and shows different aspects of the Whirlpool.

20 Some of the asteroids that formed in the ancient Solar System were captured long ago by Jupiter's gravity. They're called trojans, and astronomers think they hold unique clues to the early Solar System. NASA's Lucy mission is headed for Jupiter with a plan to visit eight of these asteroids. A famous 3-million-year-old fossil skeleton that aided our understanding of ancient hominoids was given the name Lucy. This inspired a famous Beatles song. It also inspired the name of the trojan mission. John Kraus captured a beautiful image of Lucy's launch from Cape Canaveral in October.

21 Stonehenge is a great prehistoric stone circle built to align with the solstices, now in the care of English Heritage. At the winter solstice, if you stand with your back to the entrance – the Avenue dropping away behind you – the sunset is visible. The summer solstice is the site of mid-summer celebrations and has probably been so since ancient times. Yet it's likely that the builders of Stonehenge regarded the winter sunset as more important. They would have known that this day marked the turning of the year, and that the weather would improve and spring would come round again. [Description from English Heritage curator Heather Sebire.]

22 The Dolphin's Head Nebula is in the constellation Canis Major. The photo shows a bright star just above the center of the bubble – it's over 20 times the mass of the Sun. The aging star created the cosmic bubble, which is a whopping 60 light years across. The photo is the work of British astrophotographer Nik Szymanek.

23 An enormous orange ball looks ready to roll down a tree-lined hill. But it's not a ball, it's the Sun with several sunspots, photographed in Sierra del Cid in Perter, Spain. There are silhouetted pine trees, and if you look closely, some silhouetted people. Jordi Coy took the photo from 3.5 kilometers away, and used a dark filter to mute the Sun and enhance the detail of the sunspots.

24 UGC 2885 is a giant spiral galaxy over 200 million light years away in the constellation Perseus. It's eight times the diameter of the Milky Way with ten times as many stars. Its nickname is Rubin's Galaxy because it was part of Vera Rubin's study of the rotation of galaxies that showed the dominating presence of dark matter in the Universe. Vera Rubin died on Christmas Day 2016. She once said “My life has been an interesting voyage. I became an astronomer because I could not imagine living on Earth and not trying to understand how the Universe works.”

Christmas Day In December Tunç Tezel (TWAN) took a photo of "Three Planets and a Comet" in the village of Kirazli, Turkey. There's a diagonal line of three planets: Jupiter, Saturn, and Venus. Comet Leonard is quite faint. It's to the left of and lower on the horizon than Venus, completing an equilateral triangle with Venus and Saturn.

You Should Also Read:
What Is a Galaxy
Aurorae – Polar Light Shows
What Is a Nebula