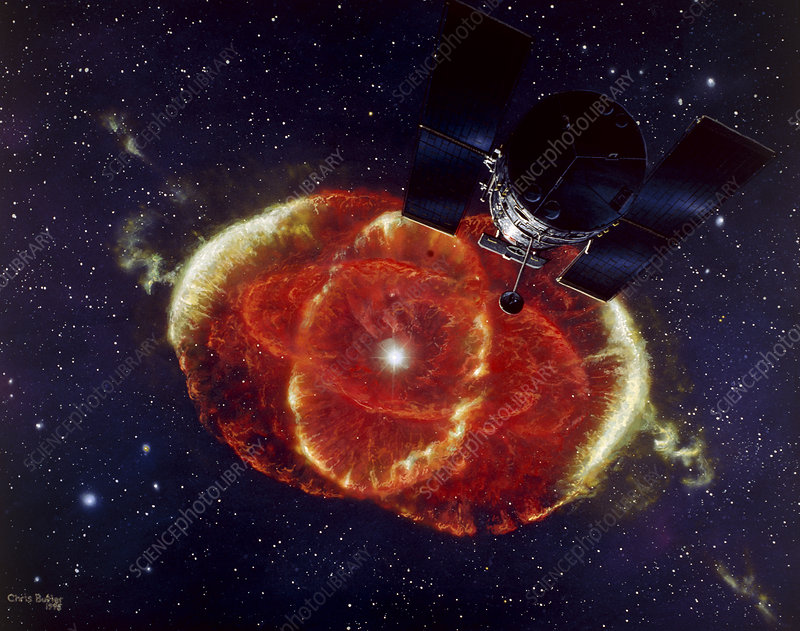 The Cat's Eye Nebula (NGC 6543) was discovered by William Herschel in 1786. The Hubble Space Telescope is superimposed on an image of the nebula. [Science Photo Library]

Christmas 2021 is past now, but you can still enjoy the daily Astro Advent images posted in the Bella Online Astronomy Forum. The second eight days of the countdown included a cosmic smiley, an Arctic fireball, and some winners from the Astronomy Photographer of the Year 2021 competition at the Royal Greenwich Observatory in England.

There are only a few picture links in this article, but there is a link to the forum thread at the end.

9 The Greenwich Observatory photo competition has, once again, produced many delights. One of them is the photo of an edge-on spiral galaxy taken by Nicolas Rolland and Martin Pugh. A dark lane of gas and dust crosses the galaxy. It's made people smile because they also captured bright foreground stars that make the image into a funny face.

10 Mars was big news in 2021 when space missions from three nations arrived in February. There to greet them was the ESA-Roscosmos ExoMars Trace Gas Orbiter (TGO) which arrived in 2016. The TGO is studying the planet's atmospheric gases and mapping the Martian surface for water-rich locations. It will provide data relay services for the second ExoMars mission due in 2023. The TGO also takes some pretty pictures, including a triplet of medium-sized impact craters on the Lunae Planum.

11 You can be unlucky going to the far north to see the aurora borealis. The aurora isn't guaranteed to perform, and the weather may not cooperate. However, astrophotographer Yang Sutie went into the Arctic to get a series of northern lights images for a time-lapse video. And he was extremely lucky! Not only did he get an auroral display, but his aurora camera captured a very bright meteor – a Geminid fireball – as it streaked across the sky.

12 An image of the California Nebula (NGC 1499) won the Stars & Nebulae category in the Greenwich Observatory competition. Its shape resembles that of the state of California, and Terry Hancock named his image California Dreaming. He photographed the nebula over seven nights using a set of filters to get a rainbow of colors to highlight the different gases in the nebula. One of the competition judges commented that "the composition of the photograph almost looks like a splash of paint against the starry background."

13 This is not an abstract painting. The image was taken by ESA's Copernicus Sentinel-1 satellite looking down on the Amazon. The river rises in the Andes and travels through six countries before emptying into the Atlantic Ocean. The image has been processed to show bodies of water in blue. Cities and built-up areas are in cyan. Yellow and orange are rainforest.

14 Sunspots look darker than the rest of the Sun because they're cooler than their surroundings. Yet the regions above sunspots can be up to a hundred times hotter. How? Less than half of the Sun's light is visible to us, so astronomers need to study it in invisible light. NASA used the orbiting Solar Dynamics Observatory (SDO) and Nuclear Spectroscopic Telescope Array (NuSTAR) to produce this image. Ultraviolet light from SDO is shown in red. Green and blue show emissions of high-energy X-rays taken by NuSTAR.

I hiked deep into the dunes and eventually found the foreground I had imagined for this shot. As I set up my gear, the red of the sunset faded into the blue twilight. Once everything was assembled, I looked up and there hung a shining sliver of a crescent moon.

16 NGC 6543, the Cat's Eye Nebula, is one of the most beautiful of the planetary nebulae. The Astro Advent image – which isn't the one at the header of this article – was made by combining an optical image from the Hubble Space Telescope with X-ray data from the Chandra Observatory.

Here is a Link to Astro Advent forum thread.


You Should Also Read:
What Is a Galaxy
Aurorae – Polar Light Shows
What Is a Nebula