In HOP, a 2011 Easter-themed film released on April 1st, 2011 and stars Russell Brand, Hugh Laurie, James Marsden and Hank Azaria, features E.B., the rabbit due to succeed his father, Mr, Bunny, as the next Easter Bunny. However, it is upon the eve of E.B. taking over his new role, the demands of being the Easter Bunny becomes too much and too intimidating that E.B. takes off to Hollywood in an attempt to pursue his dream of being a drummer. As he wanders his way through Los Angeles, E.B. is hit by an out-of-work slacker, Fred O'Hara, while Fred is on his way to his sister Sam's, boss's house that he is housesitting. E.B. persuades Fred to take him in while he recovers from his "injuries". Of course, nothing ever goes as well as planned, and E.B. gets Fred in a bit of trouble, forcing Fred to try to abandon him in the wilderness. However, quick thinking on E.B.'s part leads him to reveal himself as the Easter Bunny, which Fred had the fortune to see as a youth.

Meanwhile, Mr. Bunny has found out about E.B.'s sudden abandonment from his calling and he sends out his three ninja royal guards, known as the Pink Berets, to bring his son back. However, unknown the Mr. Bunny, two little conniving Easter Chicks, Carlos and Phil have their own little coup d'etat planned for Mr. Bunny as they attempt to take over the Easter organization.

With so much drama going on, will Easter be the same? Well, with HOP being released on March 23, 2012, you'll get your chance to find out. Head over to the Children's Movies Forum and find out how. 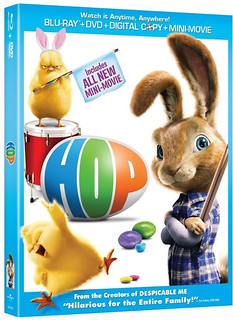 Beauty and the Beast 3D