Cold weather and long dark nights there may be, but their arrival is the perfect reason to try a whole variety of warm, and warming, drinks, guaranteed to keep body and soul together...and here are three traditional seasonal recipes. 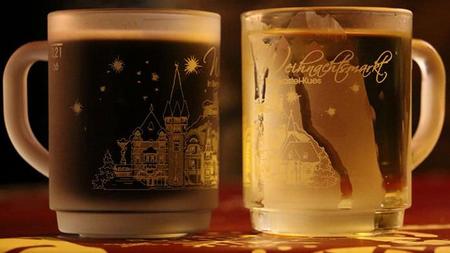 Literally Glow Wine, and "glowing wine" or "wine to make you glow" sums it up perfectly, it is a popular and warming winter drink, not only during Advent, Weihnachten, or at the seasonal Christmas Markets, but also when tucked up warmly at home at any time during the cold winter months.

Glühwein is wine, fruit and spices heated to just below boiling point before drinking, and there are many different recipes, but this is a special one given me by a friend in the Schwarzwald, The Black Forest, an area where they produce some wonderful wines, and make excellent mulled wine.


GLÜHWEIN, A RECIPE FROM THE BLACK FOREST

Pour wine into a large pan and warm slowly to just below boiling point.

Wash apple and an orange, cut orange into slices including peel, core and remove seeds from apple cutting into small chunks.

Squeeze juice from remaining oranges and the lemon.

Add all the ingredients including the spices, but excluding the sugar, to the warmed wine, and simmer gently for 20 minutes, allow to stand for another 20 minutes then taste.

Remove the cloves, star anise and cinnamon if you feel it is spiced enough, and sugar added to your taste.

Now it can be left for a few hours and is there ready for surprise guests.

The fruit can be removed and the mixture strained through cheesecloth or a fine sieve but that is optional. Slowly reheat the wine mixture, it is important that the liquid never boils, and pour the Glühwein into warmed mugs or heat proof glasses.

Glühwein with White, Raspberry, Blueberry, or Blackberry wines, as well as alcohol free wine, are variations that can be made with this recipe.

While a shot of Amaretto or Rum added as it is served is a Weihnachtsmarkt favorite.


An alternative quick and easy version of Glühwein

Mix all the ingredients in a large pot and stir over medium heat. Allow the mixture simmer for about 20 minutes.

Remove lemon, and strain through a cheese cloth or a fine sieve if you want to make sure no clove grains remain but this is optional, and serve in individual glasses garnished with a cinnamon stick.


And now Kinderpunsch, "Childrens Punch", an alcohol free punch not only a favorite for children, but a delicious warming drink for everyone...and it looks like the "real thing".

1 Liter brewed fruit tea, Blackberry for example
500 ml Apple Juice. It is worth trying apple first but it can also be white or black grape juice
15 Cloves
2 Cinnamon sticks
2 Lemons or Limes
1 untreated orange to use juice and the peel
Brown Sugar

Wash orange thoroughly then peel and juice.
Juice lemons, or limes.
Put all ingredients including orange peel into a pan and simmer to warm through, do not bring to boil.

Leave for 15 minutes, remove the orange peel and spices, slowly reheat to required temperature with sugar added to taste.


Last but not least a recipe for a Pharisaeer, which is basically coffee and rum but has a great story behind it.

In Germany a Pharisee is another word used to describe

a hypocrite, there are several including Scheinheiliger a "pretend saint".

A pastor in 19th Century Northern Germany had given strict instructions that no alcohol should be served at a Christening. Unfortunately he then found out it had been, in the guise of coffee where the aroma of the rum had been prevented from escaping by a thick layer of whipped cream. He had been given a mug without any alcohol so according to the legend, when he discovered what was going on, he shouted out "You Pharisees" to the rather "merry" guests, and the rum and coffee drink got its name.

Put two teaspoons sugar into each of four mugs (and they don't have to be the cute authentic ones, but it is better if they are tall)
After warming the rum pour 20 ml (1.1/4 tablespoons) over sugar
Pour hot coffee into mug
Top with whipped cream

The "Pharisaeer" should not be stirred, simply drink it from beneath the mammoth layer of whipped cream just as it was all those years ago at that infamous Christening.