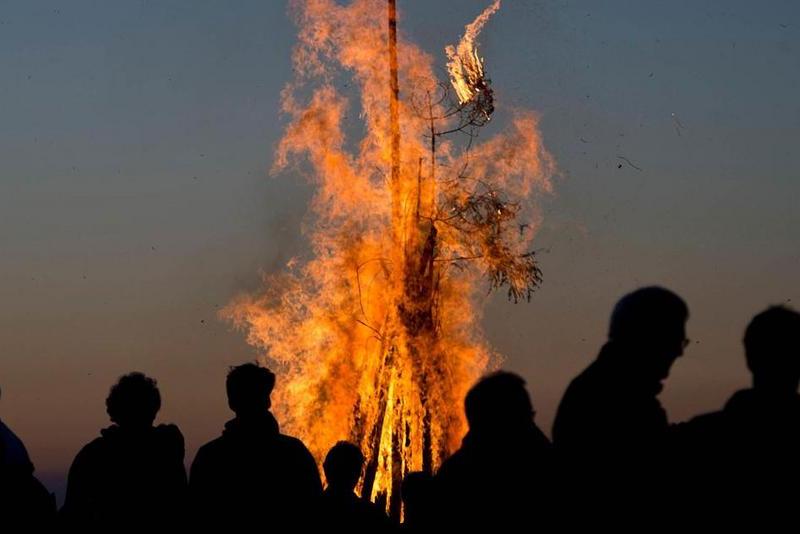 Midsummer Eve and Summer Solstice...nights of a thousand fires in many German speaking regions. Once of great mystical significance, a time for pagan Germanic and Celtic tribes to celebrate the triumph of sun and light over cold and darkness with Sommersonnenwendfeuer, Summer Solstice Fires.

Its links to ancient cultural practices symbolic of renewal, fertility and harvest, meant celebrations for summer solstice on June 21 had long been an

established pre-Christian festival, and was known as "Litha" in some cultures. As was their usual custom, the Christian church turned this existing festival into a religious feast day, and the June 24 festivities soon became those of John the Baptist.

One of the "quarter days" welcoming each of the four seasons, and halfway to the commemoration of Christ's birth on December 24, it is celebrated as the day of St. John's birth. Six months before that of Jesus.

Although the clergy intended pagan and Christian festivities to be kept separate, Sommer-Sonnenwende and Johannisnacht, Summer Solstice and Midsummer Night, became almost interchangeable.

Centuries after the town council of Nuremberg issued a decree on June 20, 1653, to "Do away with all such unbecoming superstition, paganism and peril of fire on this coming day of St. John", after sunset on June 23 in many regions of Austria, Germany and Switzerland fires burn on mountains, hillsides, open spaces, and alongside lakes and rivers.

Especially in the mountains "Fire" was a traditional symbol for the Sun and, with the advent of Christianity, for Christ.

The connection between fire and the warmth of the sun, with its role in creation, rebirth and renewal in nature, is also a symbol for Summer Solstice and the beginning of summer...the widespread customs and rituals centered around it thought to bring love, fertility, purification and health.

Young girls sought predictions in the flames as to their future husbands; pairs of lovers jumped hand in hand through fires as they died down to bring them luck. Some jumped from one side to the other to burn off illnesses for the next year, while another aim was to frighten away any spirits and demons who happen to be around.

Few believe in spirits and demons today, but seeking predictions and jumping through the dying flames for various reasons, including "just for fun", are traditions that have lost none of their popularity.

The rose with its importance in the pagan and Christian world is not only one of the most popular shapes for a mountainside fire, but is included in bouquets with Delphiniums, Cornflowers, Lilies, Poppies, Oak leaves, Ferns, Club moss, Artemisia and Saint John's Wort.

Hung upside down until dried, the bouquet is kept as a symbol of healing beauty and protection for the whole year.

While herbs were believed to take on special healing powers on Johannistag. In the morning Johannisweiblein, women who were experts on herbs, would collect flowers as well as herbs for the Hausapotheke, the medicine chest, and Daisy, Arnica, Club moss, Verbena, Chamomile, Burdock, Mullein with its fuzzy leaves, (known in Germany as Sonnwendblume - Solstice Flower), Thyme, Comfrey, Marigold and Saint John's Wort, (Johanniskraut - John's herb), would always be included.

These days the same flower and herb mixture is collected and made into a posy, a Johannissträuße, which is placed in a vase or dried and used during the year.

Water, together with the flowers and herbs, was credited with healing powers on Midsummer's Day; "the day of healing". Together with singing, dancing, feasting on everything from sausages to Wiener schnitzel and general "partying", wells and fountains are cleaned and decorated.

While the ancient custom of bathing in lakes and streams, for "therapeutic purposes", is one reason fires are still lit alongside them.

Many sites are "gifted" with truck loads of sand, and this is spread around the bonfire area for the festivities, then removed in the morning.

During the weeks leading up to the festivals wood is collected and carried up mountains and hills, or moved to flat land. There, along with sacks filled with rapeseed oil and sawdust, it is used to make huge mounds. Shortly before dusk on Midsummer Eve, and often accompanied by a religious service, the bonfires dotted around Germany are alight and fun and games begin.

There are many events and festivities, including in gardens and on balconies illuminated with candles, but one of the most impressive in Germany takes place on the country's highest mountain, the Zugspitze in Bavaria.

A spectacular sight, hundreds of bonfires are laid out on the mountainside with each group of fires a picture carved out with flame. From a distance they take on a shape: a bear, an eagle, rose, a cable car, and the glowing images cover the mountain.

The tradition began in the 14th century with fires symbolizing the sun, while hopefully frightening away devils or evil spirits, and now it attracts thousands at Summer Solstice.

Fire welcomed the summer from hills and mountains in pre-Christian times, and is still one of the many ancient Midsummer/Solstice customs that play an important role in celebrations held today.