Enjoy fish? Then you will love Steckerlfisch, they are delicious.

First used in 1902 to describe "Grilled Fish on a Stick", the word comes from "Steckerl", Bavarian dialect for little stick, and "Fisch", German for fish, although it had been a favorite way of cooking fish for centuries for towns and villages in the foothills of the Alps.

Long before it had a name.

Originally it was fish from the many Bavarian lakes and rivers but, as transportation became easier, others like herring and mackerel became popular.

As the high "healthy" fat content of their flesh means they won't dry out while cooking Salmon, Halibut, Swordfish and Tuna are among other fish used.

These days, unless from a specialist fish supplier or restaurant, it is usually mackerel that is served in Biergärten, beer gardens, during Germany’s "out door living season" and at Munich's Oktoberfest.

Grilling or barbecuing your own choice of fish to a Steckerlfisch Recipe is fun, easy, that little bit different and well worth the effort.

Prepare and gut the fish if it has not already be done, leaving the head, fins and tail. Wash thoroughly under running water and dry. 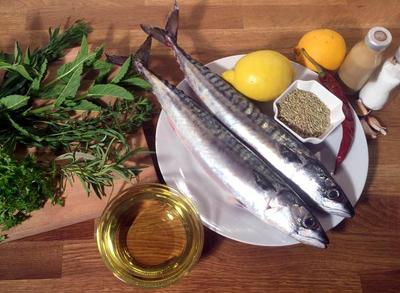 Rub the inside and outside of the fish with lemon juice and salt and pepper.

Leave for 5 to 10 minutes, then brush the marinade over the fish making sure it is well covered.

Any leftover herbs can be put inside the fish.

Using very long, strong 24 inch, wooden kebab sticks or other suitable sticks, that have been soaked in water, place the stick in the fish from mouth to tail.

Place in a large flat container, or wrapped in saran wrap, for at least 12 hours so the marinade can work.

After removing from the fridge allow to come to room temperature for about one hour.

Place the fish over a glowing barbecue or grill, and make sure there are no flames. The fish should be angled over the charcoal fire, this way the fat runs down the stick and not onto the fire itself.

The grilling coals can have pine needles or herbs such as Rosemary, Thyme, or Juniper added during the cooking time, it not only makes a delicious aroma it also add to the flavour.

Keep basting the fish with marinade, or butter, as it cooks, and turn it from time to time as this ensures an evenly crisp skin.

When it has been bought from an "outside" source it is traditional to eat the fish on the paper in which it had been wrapped, but in a beer garden, just as at home, it can be served on a plate together with a pretzel, potato salad or horseradish sauce and boiled, buttered potatoes.