Not all Germans are happy with their popular national dish being called a noodle, considering it to be several levels higher in the culinary hierarchy.

Although Spätzle is basically pasta dough, just one containing a high percentage of eggs, and as with many meals popular in today’s

Germany, originally a dish for poor country folk who had no alternative, so they were sometimes known as "Beggar's Noodles", Bettelleits Nudla.

These rough edged, curly noodles, ranging from white to yellow depending on how many eggs have been added, can be small or macaroni length and are super absorbent so all types of Spätzle sauce can be served with them.

There are several theories how their name came about but the main one is that originally Spätzle were larger than now, pre-1725 paintings show this, and the small pieces of dough were shaped by hand then dropped into boiling water, with the cooked dough somehow reminding people of a little bird. So they were called Spätzle, pronounced "SHPAYT-zlee", and coming from "Spatz" sparrow, and Southern German dialect for "small sparrows".

So having either made your own Spätzle, or bought them, what happens next...

During the winter and autumn, with various seasonings or "au naturel", they are a frequent accompaniment to roast or braised meat, beef rolls, poultry or game, as an alternative to potatoes.

Or a quick and nourishing weekday meal with cheese sauce, caramelized onions, mushrooms, grilled bacon, Black Forest ham, or a mixture of all of these. Sprinkled with breadcrumbs which have been pan fried in a little butter until they are golden brown, they are served with the fresh salad that accompanies many meals in Germany.

But there are popular specialty dishes served at home as well as appearing on restaurant menus, and an all time favorite German Spätzle recipe is:

Clean and slice the Mushrooms. Peel the shallots and chop finely
Melt the Butter in a large casserole pan, add the Shallots and allow to soften
Cook sliced Mushrooms until beginning to soften in fat free pan. This will ensure that any extra moisture is absorbed.
Stir shallots and add sliced Mushrooms,
Add the minced Garlic or Chili paste if used, and White Wine, simmer for about two minutes
Add the Cream, season with salt and pepper
Cook the sauce over a low to medium heat until it reduces by about one third
Add the chopped Herbs and adjust seasoning, bring back to heat, leave for two to three minutes stirring occasionally
Meanwhile heat the prepared Spätzle, divide into four bowls
Pour sauce over and as an option sprinkle with grated cheese, and/or with caramelized onion rings.

Serve with a fresh salad


This recipe can also be "ueberbacken" to make Spätzle Gratin.

Prepare the Spätzle and place in large dish, add mushroom sauce and mix through, then add grated cheese, thin slices of bacon can also be added, 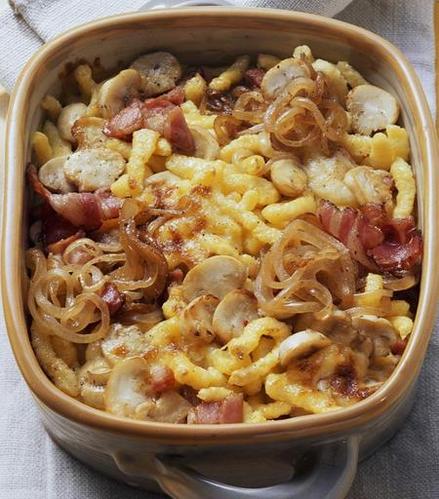 and sliced onion rings pan fried until soft but not colored. If using immediately grill until cheese melts, if cooking later bake at 400 degrees F, gas mark 6, 200 C for 20 minutes if the oven is preheated, 25 to 30 if cold.

Another popular "ueberbacken" idea is mixing cooked Spätzle with small cubes of Black Forest ham, or thin slices of bacon, which have been lightly fried until crisp, thinly sliced onions cooked until soft but not colored and finely chopped chives.

Place layers of ham mixture in an oiled or buttered dish and cover each layer with grated Gruyere cheese, salt and pepper.


The quantities are a matter of taste, but a good starting point is 1 lb Spätzle with 8 ounces of ham or bacon, 8 ounces of cheese and two onions.


Spätzle fits easily to many things and two more popular meals are Spätzle salad with feta cheese, bacon and tomato pesto and the typical regional dish from Swabia Spätzle mit Linsen. Spätzle as a side dish to cooked Lentils and Wurst or pork cutlet.

If you have any of your homemade Spätzle left over, or you want to prepare them ahead of time, they are easily frozen and re-heated. Just make sure they are well drained before freezing.